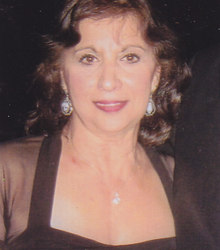 Angela Barsel Mendes, 68, of Long Branch, passed away Friday, October 9 at Monmouth Medical Center. She was born and raised in Astoria Queens. Angela became a lifelong resident of NJ where she raised her family. Angela enjoyed reading and renovating homes. She was an avid boater and fisherman. Angela was a real estate agent, restaurant manager and a small business owner. Of her many careers, being a homemaker was her favorite. When it came to her children, Angela was described as a lioness with her cubs. She lived for her grandchildren and considered it an honor to help care for her grandbabies. Angela was at her happiest cheering for her grandson at his many sporting events and facetiming with her granddaughters since their move to Florida. Angela is survived by her husband, Thomas Mendes; daughters: Michelle Lattanzio, Gwen Barsel Abbot, and Jennifer Ingenito; son, T.J. Mendes; daughter-in-law, Modelyn Mendes; son-in laws: Bruce Abbot and J.C. Ingenito; grandchildren: Alexis Mendes, Sklyer Mendes, Tyler Abbot, Peyton Barsel and Robert Barsel and her brothers & sisters-in-law, Tommy & Delores Tedesco and Joseph & Kathleen Tedesco. She was predeceased by her brother, Charles Abruscato and son, Alex Barsel. Special thanks are given to the many nurses at Monmouth Medical Center for their compassion and care. The family will be honoring Angelaâ€™s final wishes and in time will have a celebration of her life in lieu of a funeral service. Contributions may be made to Elberon First Aide in Angelaâ€™s memory. To share a favorite memory of Angela please visit her Book of Memories at www.woolleyboglioli.com.

Service:
There will be a Celebration of Angela's life at a later date.

To leave a condolence, you can first sign into Facebook or fill out the below form with your name and email. [fbl_login_button redirect="https://wbhfh.com/obituary/angela-barsel-mendes/?modal=light-candle" hide_if_logged="" size="medium" type="login_with" show_face="true"]
×