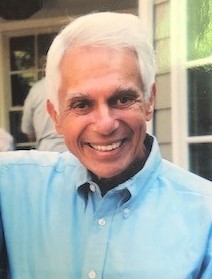 Anthony Bruno, a brilliant inventor, engineer, and loving father, died peacefully on Wednesday, June 10th in Neptune at the age of 84.

He was born in the Bronx, New York on April 17, 1936 to the late Alfonsina (Franze) and Letterio Bruno.

Anthony married the love of his life, Joan Valcich on April 23,1960 in Brooklyn. Together they raised two beautiful daughters, Christine and Jeannine in Staten Island. He is predeceased by his brother Louis Bruno.

Anthony was a determined and brilliant man who went on to invent the electric pencil sharpener, create miniature steam trains from the internal parts of watches, and built a snazzy car for his brother to cruise down the streets of Brooklyn. His persistence genius shone through when he scored number one in New York City and number two in New York State on the mechanical engineering boards. He spent his life working for the New York Board of Education as a professional mechanical engineer. To his family, he was “Mr. Fix-It” and loved working and creating with his hands. Above all, Anthony loved spending time with his grandkids, taking them crabbing, pushing their carriages, and teaching them to build toy boats, trains, and cars. He will always be loved by his family and all those who have had the gift of encountering him in life.

Surviving is his wife Joan (Valcich) Bruno of Pine Beach; his two children: Jeannine and her husband William Marcinczuk of Freehold, and Christine and her husband Sean Slattery of Middletown; and his six grandchildren: Samantha, John Rudy, Jennie, Renee, Steven, and Lianna. He is also survived by his brother Robert Bruno.

In lieu of flowers, donations may be made to No Limits Cafe in Anthony’s name at https://www.nolimitscafe.org/donate-in-memorytst/

To leave a condolence, you can first sign into Facebook or fill out the below form with your name and email. [fbl_login_button redirect="https://wbhfh.com/obituary/anthony-j-bruno/?modal=light-candle" hide_if_logged="" size="medium" type="login_with" show_face="true"]
×