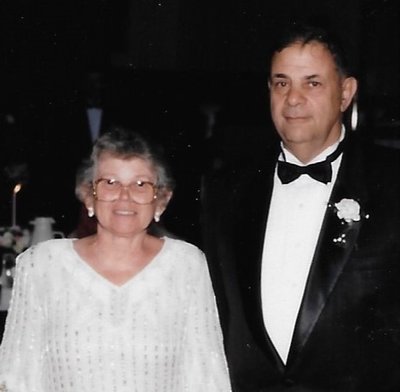 Arthur, known as Artie to his friends and family, was born and raised in Newark, NJ. At the age of 23, he went on a blind date and met the love of his life Marie. Two years later, the two were married and the rest is history. They moved to Cliffwood Beach where they had 2 children and eventually settled in Colts Neck where they had a third child.

Artie was a veteran of the United States Navy and served in WWII. After returning from the war, Artie began a career as a mechanic establishing himself as the go to person for all things mechanical. He went on to become a Service Manager and after retirement he spent his time on various ventures, one of which was helping Marie with her antiquing. Artie would often take non-working or broken treasures and would repair them to their original working glory. He was also amazing at re-purposing items Marie found and turning them into something bigger and better. Artie could be found by Marie’s side every weekend as they attended various antique shows from Rancocas Woods to Cape May. Artie’s other love was his vintage 1932 Durant that he painstakingly restored to pristine condition. He made many friends along the way attending car shows and swap meets with Marie. And what retirement wouldn’t be complete without trips to AC? Artie and Marie loved going to Atlantic City and playing the slots. They also made special memories with each other traveling to Italy. Artie and Marie were married 70 years at the time of Marie’s passing. Artie missed his “peanut” terribly and looked forward to seeing her again someday. They are now together for all eternity.

Arthur is predeceased by his wife Marie and his son Arthur Senopole, Jr.

Arthur is survived by his children Anna Testa of Nevada, and John and his wife Carolyn Senopole of Howell, his many grandchildren and his sister Gloria Sanok.

To share a favorite memory of Arthur or send messages of condolence please visit his page of tributes at www.holmdelfuneralhome.com.

To leave a condolence, you can first sign into Facebook or fill out the below form with your name and email. [fbl_login_button redirect="https://wbhfh.com/obituary/arthur-r-senopole/?modal=light-candle" hide_if_logged="" size="medium" type="login_with" show_face="true"]
×