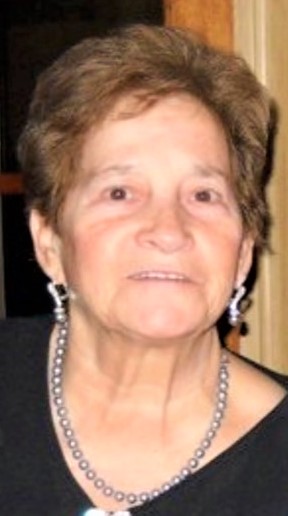 Carmela Lercara was born and raised in Prizzi, Italy. In 1958, she married the love of her life, Angelo Villaraut, whom she had been together with since she was 12 years old. After a few years, they moved to Torino, Italy where they started their family together. In 1968, they immigrated to the United States; first starting off in Jackson Heights, Queens, then moving to Elizabeth, then Rahway, and eventually settling in Clark, NJ.

Together, Maria and Gino opened two pizzerias. First, was “Gino’s Pizzeria” in Rahway, NJ, which they ran for 7 years. Their famous special was two slices and a soda for $1.00.  After selling “Gino’s”, they opened “Mamma’s Pizza” in Garwood, NJ, where they continued to share their love of food with the community.

In addition, Carmela and her husband enjoyed traveling the world together with their family. They have explored places including Spain and many places in the United States, such as Hawaii and Alaska. Also, they enjoyed yearly trips to Disney World with their family. They spent a lot of their time at their vacation home in Sarasota, Florida, where they would spend their weekends walking in Saint Armands Circle enjoying the local gelato store.

Not a night would go by without Carmela and Angelo holding hands while falling asleep. They were inseparable. Carmela will be deeply missed by her husband, her family and friends, and all who were lucky to have known her.

Carmela is predeceased by her daughter and son-in-law, Phyllis and Carl D’Agostino; and her 9 brothers and sisters.

Carmela is survived by her loving husband of 64 years, Angelo Villaraut; her daughter, Paola Quaglia and her husband, Lou of Toms River; her son, Sandro Villaraut and his wife, Angela of Garwood; her sister, Fifina Villaraut; her beloved grandchildren, Cristina and her fiancé Mike, Jessica and her husband Dani, Rocco and his wife Daniella, Sabrina and her fiancé Anthony, Maria, Gino, Laura and Angelo; and her great grandchildren Saverio and Enzo. Maria will be forever known as “Nonna Mi” by all of her grandchildren.

Visitation will be on Friday, July 15th from 4:00-8:00 PM at the Holmdel Funeral Home, 26 S. Holmdel Rd, Holmdel. A mass of Christian burial will be offered on Saturday, July 16th at 10:30 AM at St. Catherine’s RC Church, 108 Middletown Road, Holmdel. An entombment will follow at Marlboro Memorial Cemetery.

The family request that flowers be ordered from Donato Florist in Roselle Park. https://www.donatoflowers.com

To leave a condolence, you can first sign into Facebook or fill out the below form with your name and email. [fbl_login_button redirect="https://wbhfh.com/obituary/carmela-maria-villaraut/?modal=light-candle" hide_if_logged="" size="medium" type="login_with" show_face="true"]
×