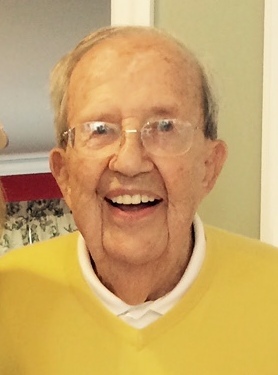 Mr. Charles F. Kitson, 95, of Colts Neck passed away at his home in Colts Neck on October 17, 2016. Born in Jersey City, NJ he served in the U.S. Army during World War II, as a Sergeant Major. He then was the owner and President of Kitson Chevrolet originally in Long Branch and then in Eatontown. Mr. Kitson was the President of the New Jersey Automobile Dealers Association, Director of the Shadow Lawn Savings and Loan, President of the Eatontown Chamber of Commerce, and a member of the CBA Founders Club. He was predeceased by his loving wife Mildred in 2011, and his son Brother Charles Kitson, FSC in March, 2016. He is survived by his daughter Mildred and her husband William Herndon; his grandchildren Suzanne Del Gallo and her husband Len, Joseph R. Holsey and his wife Kim, Carrie Cisar and her husband Mike, and John Herndon and his wife Cathy; his great grandchildren Stephen, Sean, Timmy, Joey, Ally, Katie, Michael, and Matthew; and by Julie. Visitation will be at the Holmdel Funeral Home, 26 South Holmdel Road, Holmdel, NJ on Thursday October 20th from 4:00 to 8:00 P.M. A Funeral Mass will be offered on Friday at 10:30 A.M. at St. Mary’s R.C. Church, 1 Phalanx Road (at Route 34), Colts Neck, NJ 07722. In lieu of flowers, donations made in his memory would be appreciated – The San Miguel School, P.O. Box 6367, Providence, R.I. 02940. For directions, or to leave a message of condolence in his Book of Memories, please visit www.holmdelfuneralhome.com.

To leave a condolence, you can first sign into Facebook or fill out the below form with your name and email. [fbl_login_button redirect="https://wbhfh.com/obituary/charles-f-kitson/?modal=light-candle" hide_if_logged="" size="medium" type="login_with" show_face="true"]
×