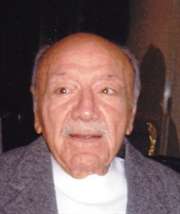 Charles P. Mancini, 87 of Ocean Twp. passed away Sunday February 26th at his home. Mr. Mancini was born in Newark and had lived in Livingston and Toms River before moving to Ocean Twp. in 1992. He was a Gunners Mate in the U.S. Navy in World War II. He retired as Professional Firefighter and served on the Rescue Squad for the City of Newark in 1985, after 25 years. Mr. Mancini served as the Financial Secretary of the Newark Firefighters FMBA. He is survived by his wife of 66 years, whom he started dating when he was 15 years old, Yolanda Alfieri Mancini; two sons, Thomas J. Mancini, Hollywood, Ca. and Charlie Mancini, Allenhurst; a daughter, Susan Mancini, Tinton Falls; two sisters and a brother-in-law, Adelaide and Leo Luciano, Livingston and Jeannie Centrella, Howell Twp.; and a granddaughter, Nydia I. Mancini, Sanford, N.C. Visitation will be Thursday, 2 to 4 and 7 to 9 PM at the Woolley Funeral Home, 10 Morrell Street, Long Branch. Funeral liturgy will be celebrated 11 AM, Our Lady Mt. Carmel Church, Asbury Avenue, Asbury Park. You may light a candle of condolence by visiting www.woolleyfh.com.

To leave a condolence, you can first sign into Facebook or fill out the below form with your name and email. [fbl_login_button redirect="https://wbhfh.com/obituary/charles-p-mancini/?modal=light-candle" hide_if_logged="" size="medium" type="login_with" show_face="true"]
×