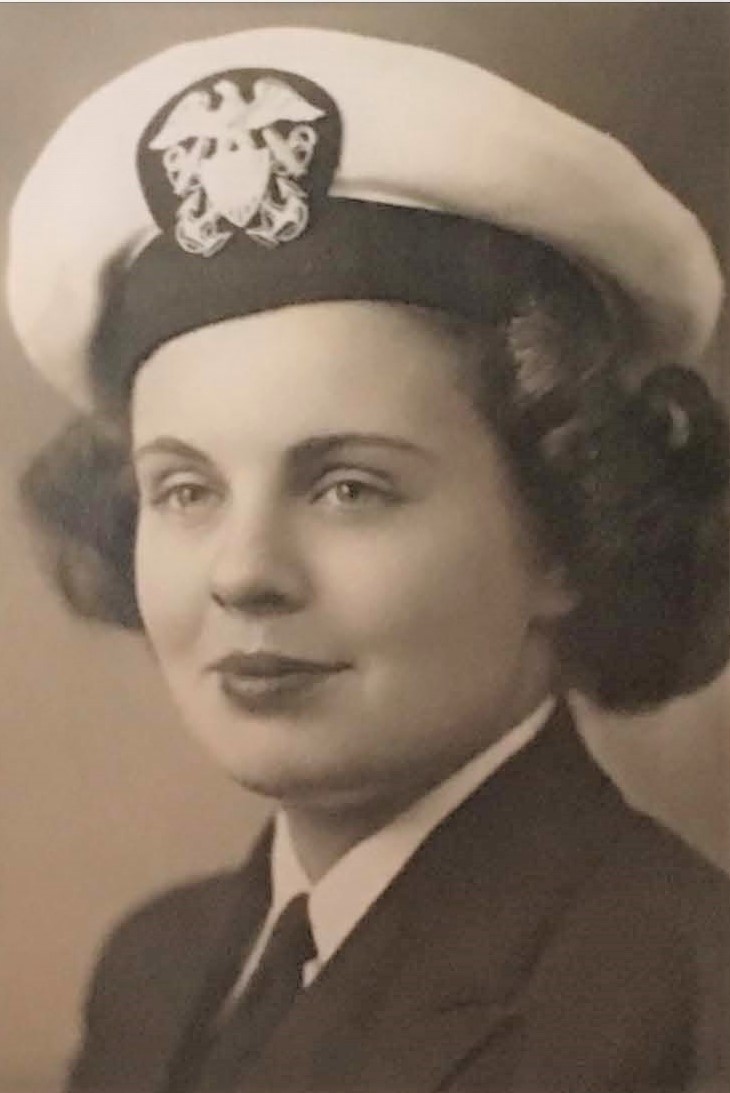 Edith Stacy Ackerman, known affectionately as “Edie May,  Mum, and GG” passed away peacefully on November 23 with her daughter, Marilyn, and Aide, Rita, by her side all listening to Christmas Carols.  Born in New Brunswick, New Jersey to Philip Peckham Stacy and Ida Edith Stacy on August 31, 1922, the family moved to Catasauqua, Pennsylvania where she spent 22 years.

Following her graduation from Catasauqua High School, she earned her Registered Nurse degree from Middlesex General Hospital, and as a NAVY WAVE, was able to take classes at Rutgers.  While there, a boyfriend invited his fraternity brothers to serenade her, and Joe Ackerman snuck back the following day with a chocolate cake.  He became the love of her life and future husband.  Stationed in Philadelphia during World War II, she worked alongside a plastic surgeon on injured Navy men.  There she met her first husband and moved to Topeka, Kansas where she raised their family.  She worked as an Ob-Gyn nurse at Stormont Vail Hospital and became a school nurse for Junior Highs and Topeka West High School, where students honored her as their “Block Mother.”  Moving to Bound Brook, New Jersey, she worked at the Lyons Veterans Medical Center.

Joe and she rekindled their romance and married in 1971.  She became his office nurse and continued to work with him until their retirement.  Patients complimented her on her ability to draw blood and offer them coffee afterwards.

They often traveled to London, where they attended nightly theater.  They enjoyed travelling throughout Europe and elsewhere.  They even rode camels in Egypt.  Their Christmas Eve parties were legendary along with Grampy’s killer eggnog and her decorations.  She began Christmas preparations as early as July, always asking “What do you want for Christmas?”  She was a member of Ariel Club and remained an Honorary Member until her death.

In 1988 Joe and she retired to Venice and Mt. Dora, Florida and moved back to New Jersey and Seabrook Village in 2013.  A proficient knitter, she knitted scarves for everyone, smocked dresses, and hand-cut lampshades.  She sailed, swam, and took exercise swim classes.  She was quick-witted and had many “Edithisms.”  Her shopping and wrapping of gifts were renowned.  She looked forward to August, as every summer the family would gather, and she would sit poolside in her sun hat and enjoy being GG.  We would celebrate her birthday and luckily fireworks were displayed.

Rita became another “daughter” with her excellent care and companionship for 7 years.  The family wishes to thank Rita along with Halcyon Elder Care and nurses Michelle and Lorraine with additional thanks to Seabrook Medical Center, especially Dr. Paul Marquette, Dr. Edward Choi, and receptionists Megan and Lisa.  We are indebted to Dr. Debra Camal for the excellent surgery and care that lengthened her life.

Her 98 years were full of joy and even in her final days, well wishes to GG on video brought a smile to her face as well as a photo of dancing with Joe.  Forever she will be remembered as saying “Once a nurse, always a nurse.”

A private service was held at Woodbine Mausoleum, where Naval Officers conducted the Flag Ceremony with “Taps” being played.  Rest in Peace, Mum and know that we carry your heart in our hearts.

Donations in her name may be made to The James F. Ackerman Federation at Jersey Shore University Medical Center and Two River Theater, 21 Bridge Street, Red Bank.

Thank you to Billy Boglioli and his Staff for all of the arrangements.

To leave a condolence, you can first sign into Facebook or fill out the below form with your name and email. [fbl_login_button redirect="https://wbhfh.com/obituary/edith-stacy-ackerman/?modal=light-candle" hide_if_logged="" size="medium" type="login_with" show_face="true"]
×