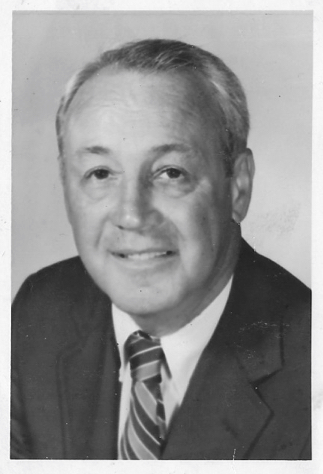 George N. Arvanitis, 92, of WEST ALLENHURST, passed away peacefully on Wednesday, February 17, at home with his wife by his side.  George was born in Long Branch, the son of Samuel and Alexandra (Sassa) Arvanitis.  He joined his older brother Cyril, two years his senior, in a loyal, loving friendship that spanned more than 75 years until Cyril’s passing in 2004.  Their mother affectionately referred to the two brothers as “the diamond boy” and “the golden boy”, which led to many family discussions trying to figure out who was who.

George was educated in the Long Branch public school system and was a four-year, three sport letter athlete at Long Branch High School, receiving numerous awards for his athleticism in track, football and basketball.   While in high school, “Chickie” as he was affectionately known, ran on a four-man low-hurdle track team at the Penn Relays.  Additionally, he spent his high school and college years working both as a caddy at local golf courses and as a lifeguard at the Long Branch Chelsea Avenue Bathing Pavilion. This helped to solidify a love for the game of golf and any body of water; he continued to play golf and swim well into his late 80’s.

George graduated high school in 1946 and received a football scholarship to Rider College, Trenton, where he continued to excel as halfback, passer and occasional punter.  He was named by many on opposing teams as the “hardest running back on the team” when he was awarded Outstanding Back of 1947.  George spoke fondly of his days in high school and college as formative to his lifelong dedication to genuine kindness, friendships across many walks of life, and empathy and compassion for those not as fortunate.

He received his B.S. from Rider College in 1950 and thereafter received a draft deferment to attend St. John’s University School of Law where he served on the Student Bar Association and Mock Trial Advocacy Team.  He graduated in 1953 with a LLB.  From 1953 to 1955, he served his Country in the United States Army Staff and Judge Advocate Office, attaining the rank of Staff Sergeant.  In 1955, Mr. Arvanitis began a required clerkship with Durand, Ivins and Carton, at the time one of the oldest and most prestigious law firms in the State.  Upon completion of his clerkship, he was offered a position with the firm and began a career primarily involving trial work.  In 1964, he was named a partner in the firm, then renamed Carton, Nary, Witt and Arvanitis.  Over the years, the firm moved from its original building in Asbury Park to a park-like setting in Tinton Falls.  In 2004, the firm sold the area to what is now the Jersey Shore Outlets.  The vast majority of his work involved civil litigation, including product liability, personal injury and legal malpractice.

Mr. Arvanitis appeared and argued before the Supreme Court of New Jersey on numerous occasions.  He was also a frequent lecturer of the New Jersey Institute of Continuing Legal Education, mentoring others on various topics including the use of effective cross-examination.

In 1982, he was inducted as a Fellow into the American College of Trial Lawyers, an invitation-only Fellowship of exceptional trial attorneys of diverse backgrounds from the United States and Canada.

In 2012, he was recognized by the State of New Jersey, in a Joint Legislative Resolution, for his fifty years as an attorney highlighted by his exemplary service and commitment to the legal profession.

In addition, George was a member of the American Bar Association, the New Jersey State Bar Association, Past President and Trustee of the Monmouth County Bar Association, while also serving on the Judicial and Prosecutorial Appointment Commission.  He was also a long-term Trustee of Monmouth College (now University). In addition, George served on the executive board of The Deal Golf and Country Club and was a member of various committees during his lifetime membership.  While he was fortunate enough to play golf throughout the United States, he most enjoyed playing his home course at Deal and more than a few sheets of gin rummy with many treasured friends.  An avid golfer, he humbly admitted to three holes-in-one.

Despite the numerous successes throughout his legal career, it was well known that George’s finest moment, by his own oft-repeated pronouncement, came when, in 1954, he married his beautiful wife, Penelope Karagias, his beloved “Lad”.  Thus began a love story spanning more than 66 years, 4 children, 12 grandchildren and one great-grandchild. George and Penny raised their family (and more than a few St. Bernards) in their turn-of-the-century home on Palmer Avenue in West Long Branch.  He thoroughly enjoyed the company of various friends, as well as his children’s friends, and over time became fondly known as “Mr. A” or “Uncle George”.  After more than 25 years, George and Penny moved to a home they built together in West Allenhurst, quickly dubbed “Club A”.  For the next 30 years, this home would also be filled with family and friends alike creating memories too numerous to mention.

George and Penny enjoyed travelling throughout the United States and Europe, making yearly trips to the Eastern Shore of Maryland, Charleston, Savannah and Sea Island.  Together, they enjoyed tackling the Times Sunday Crossword before George would invariably hand it over to Penny for completion, proudly proclaiming to anyone in the room that “Lad” was the smartest person he knew.  The love, respect, friendship and humor that comprised their marriage has been a legacy beyond compare.

While his family will remember George for his Long Branchisms (“bullouvious”, “lebendy leben”, “burrifull”) as well as his happy habit of walking in the door whistling, many others will also remember George as a true gentleman, a kind, even tempered man whose counsel was often sought.  He was a guy’s guy and the consummate family man.  He was a voracious reader with a remarkable knack for memory as well as a classic storyteller.  He was a man of good humor who often laughed before getting to the punch line.  He truly loved his life and all the many people in it.  George had that rare gift of never missing an opportunity to express his love as well as his gratitude.  He will be forever missed.

George was predeceased, in 2004, by his brother Cyril.  He will be lovingly remembered by his wife Penelope, his four children and their spouses; Michael and Kristin Arvanitis, Alexandra and Robert Faccone, Melissa and Jim Keale and Victoria Jenks.  One of his proudest monikers was being known as “Papou” by his 12 grandchildren: Sophia, Eleni and Zoe Arvanitis, Victoria and Rich Fini, Robert Faccone Jr., Kara, Margot, Elise and Christian Keale, and Alexandra, Andrew and Patrick Jenks.  George was especially thrilled to welcome his great-grandson, Oliver James Fini.  George is also survived by his sister-in-law, Eva Arvanitis, numerous nieces and nephews, and countless friends.

Mr. Arvanitis’ family will be celebrating his life with a private service.  In lieu of flowers, contributions in his memory may be made to St. George Greek Orthodox Church,  1033 West Park Avenue, Ocean Township 07712, or a charity of your choice.

To leave a condolence, you can first sign into Facebook or fill out the below form with your name and email. [fbl_login_button redirect="https://wbhfh.com/obituary/george-n-arvanitis/?modal=light-candle" hide_if_logged="" size="medium" type="login_with" show_face="true"]
×