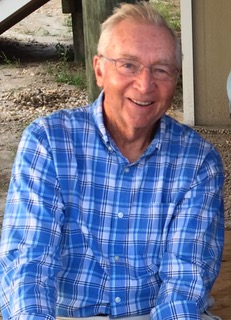 Gerard (Jerry) Joseph Collins, Sr. was born May 30th, 1935 in Elizabeth, N.J. to Joseph and Helen Collins.  Jerry received his B.A. in Accounting and his M.B.A. from Seton Hall University.

He married Grace Gallagher in 1966 in Holy Name Church in Brooklyn N.Y. and had two children, Susan and Gerard, raising their family in Matawan, New Jersey.  He was very involved father who spent every possible evening with his kids teaching the “fundamentals” of sports, playing catch or basketball.  Jerry was an impassioned sideline coach.  He loved to garden, a love he passed on to at least one of his children.

Jerry spent his 37-year career with Sterling Drug, Inc., where he met his wife Grace. He retired from the acquiring company Nycomed Inc. as CFO in 1995 enjoying 25 years of retirement.  He was known for his honesty and no-nonsense style, but most of all people always shared how they trusted him and knew that he cared about the lives of the people he worked with.  He was a wonderful provider to his family and showed by example that success was not about what you have but what you do with it.

Jerry was an avid sports fan, cheering on the Steelers, Giants, Pirates (Pittsburgh & Seton Hall).  He and his son Gerard participated in Fantasy football for many years.  He could recite every stat and was happy to debate whether a player was “over-rated”.  Jerry loved the movies, taking his kids to NYC to see Stars Wars because the theater had Dolby sound. He took his nieces and nephews to questionably appropriate rated R movies but always assured the other adults that is was “tastefully done” and to the dismay of his grandchildren he sat and watched movies of their choice but not without commenting on how “contrived” the plot was.  He loved the water and fishing which resulted in many summers vacationing with his family on the Long Island Sound eventually buying a home at the Jersey Shore. He often could be found delivering crabs, freeze packed filets and the odd tomato, to friends or family he knew would enjoy the fruits of his hobbies.  Most days you could find him checking the financial markets, completing the Asbury Park Press crossword puzzle, and answering Jeopardy questions before most of the contestants.

He was a loving Grandfather to his five grandchildren creating wonderful memories.  Pop shared his loves patiently, rebaiting hooks and filling crab traps trying to explain the art of waiting. The one to achieve the first catch of the day would be deemed to have “the touch”. All the children had a chance to “captain” his boat and learn the rules of the water.  He loved to share random facts with his grandchildren which also made him a trivial pursuit ringer. He was a walking encyclopedia which helped with several history projects throughout the years.  He infused humor and laughter (often at his own expense) and was unapologetically himself.

Jerry was involved in several volunteer activities as well as providing support to many charitable organizations through the years.  At the start of every year you could find Jerry using his financial acumen to prepare the taxes of charitable foundations as well as friends and family in need of his knowledge.  Most recently he volunteered with the Catholic ministry to NJ State Prison in Trenton. Jerry was a lifelong philanthropist, he lived his life exemplifying the message that all humans are deserving of help, kindness, and understanding.

Jerry Collins, age 85, passed away on October 18, 2020 at his home in Matawan. He is survived by his wife, Grace, sister Kathleen Ciambruschini and her husband Ralph, his daughter Susan Valle and her husband Steve, his son Gerard Collins Jr. and his wife Carolyn, five grandchildren, Sarah Valle, Anna Valle, Steven Valle, Maya Collins and Kaitlyn Collins.

The family invites you to share your stories and memories of Jerry by visiting his page of tributes at www.holmdelfuneralhome.com

In his memory, if you wish to make a contribution the family suggests the following:

To leave a condolence, you can first sign into Facebook or fill out the below form with your name and email. [fbl_login_button redirect="https://wbhfh.com/obituary/gerard-joseph-collins/?modal=light-candle" hide_if_logged="" size="medium" type="login_with" show_face="true"]
×