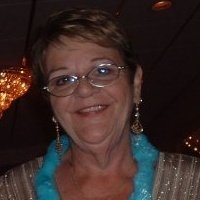 On the morning of April 16th, Grace passed away peacefully at Bethesda West Medical Center, Boynton Beach, FL surrounded by her devoted family; she was 67 years old. Born to Joseph and June Servedio in Jersey City, NJ on November 21st, 1948, Grace remained a Jersey Girl no matter where her life took her. Most recently a resident of Lake Worth, FL, her home and heart remained in Long Branch, NJ. Grace will be remembered as a strong willed, sharp tongued, and intensely caring person, who through her tough as nails exterior, carried a heart of gold. She was at her happiest when she was able to help others. This showed through her dedication as a First Aid Volunteer for the City of Long Branch for many years, where she proudly held the title of Captain and for which she was a lifetime member. She was also an honorary member of the Branchport Hose Company, Long Branch, NJ. Grace was preceded in death by her father and mother, Joseph (1997) and June Servedio (2005), and brother, Phillip Servedio (2015). She is survived by the love of her life, her devoted husband, Ronald J. Mehlhorn, Sr., Long Branch, NJ, her sister, Margaret Lopez, Richardson, TX, her brother, Louis Servedio, Manheim, Germany, son and daughter-in-law Ronald and Deborah Mehlhorn, her daughter and son-in-law Andrea Mehlhorn Marshall and Marvin Marshall, grandchildren: Emma (Kenneth), Ronald Joseph III, Caitlyn, Brooklyn, Joseph, Abby Jane and Grace Helen, as well as great grandchildren, Kenneth, David and Ryley. Grace also leaves behind her godson, Howard Centro Jr. (Cathy) as well as her first great nephew, Alex, as well as many family and friends who literally span the globe. Visitation, Wednesday, April 20th, 2016, 4:00 â€“ 8:00 PM at the Woolley-Boglioli Funeral Home, 10 Morrell Street, Long Branch. Mass of Christian Burial April 21st, 10:00 AM at Holy Trinity RC Church, 408 Prospect Street, Long Branch. Interment Woodbine Cemetery, Oceanport. Memorial donations may be made in Graceâ€™s memory to the charity of your choice. To share a favorite memory of Grace, please visit her Book of Memories at www.woolleyboglioli.com.

To leave a condolence, you can first sign into Facebook or fill out the below form with your name and email. [fbl_login_button redirect="https://wbhfh.com/obituary/grace-m-mehlhorn/?modal=light-candle" hide_if_logged="" size="medium" type="login_with" show_face="true"]
×