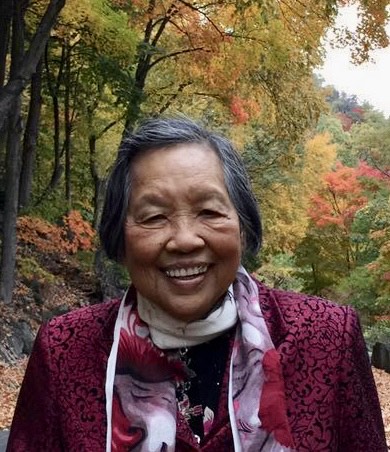 Ms. Huihao Zhong (钟惠好) passed away peacefully on July 5, 2022, at the Bayshore Medical Center in Holmdel, NJ, with family by her side.

Ms. Zhong grew up in turbulent times. Her family moved to Hong Kong. She started working when she was 9 years old, while attending night schools to learn how to read and write. Later she moved back to China and became an office administrator in a textile factory until she retired in 1985. At work, she was remembered as a kind and caring colleague. At home, she was a loving and self-sacrificing wife and mother. She was a very hospitable hostess, providing her home for relatives staying for annual family gatherings.

She was a Christian. In 1995, after reading Genesis 1:1, she immediately became a believer. She never wavered in her faith. She regularly attended church services and fellowship meetings at Monmouth Community Christian Church in Middletown, NJ, until she was no longer able. Friends remember her always heartwarming big smiles and humble demeanor. She was very loved and will be missed.

In lieu of flowers, contributions can be made to a charity of your choice.

To leave a condolence, you can first sign into Facebook or fill out the below form with your name and email. [fbl_login_button redirect="https://wbhfh.com/obituary/huihao-zhong/?modal=light-candle" hide_if_logged="" size="medium" type="login_with" show_face="true"]
×