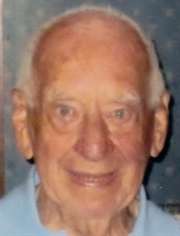 James V. Pascucci, 92, of Tinton Falls, died Wednesday, February 20th, at Jersey Shore University Medical Center. He was born in Belleville, NJ, in 1921 and was raised in Oceanport, where he resided for over 80 years. In 2008, he moved to Seabrook Village in Tinton Falls, where he remained until his death. Mr. Pascucci was a generous, compassionate man who made friends wherever he went, especially his new family and friends at Seabrook Village. He was a true family man and an avid fan of the New York Giants and Yankees and the University of Notre Dame. A loving husband, father, grandfather, uncle, and friend, Mr. Pascucci’s passion was photography and he always captured all family and special occasions with loved ones.

Mr. Pascucci served in the United States Army during World War II in both the European and Pacific Theaters. While serving his country, he was a Staff Sergeant and served in General Patton’s 3rd Army Division. Upon returning home from service, Mr. Pascucci took over the family business, Branchport Market, Long Branch. He and his wife, Marjorie, owned and operated this business for over 50 years, where they provided the finest of meats and service, and the friendliest of smiles. After selling Branchport Market in the early 1980s, Mr. Pascucci served on the Board of Directors of East Jersey Savings and Loan, now Investors Savings. Mr. Pascucci was involved in numerous community activities and organizations. A civic-minded individual, he served as Fire Chief of the Port-Au-Peck Chemical Hose Company Number 1 in 1954 and remained an active member of the company for the past 65 years. He was also a lifetime member of the Knights of Columbus and the Oceanport Lions Club. Mr. Pascucci was a communicant of Holy Trinity Church, Long Branch, and the Seabrook Catholic Community, Tinton Falls. He was also a member of the Italian American Club at Seabrook Village.

He was predeceased by his parents, Louis and Mary Pascucci; brother, Benedict Pascucci; sister, Anna P. Dorne; and loving wife of 60 years, Marjorie DeFazio Pascucci. Surviving are his two daughters and sons-in-law, Mary Ann and Joe Valenti of Howell, and Lucille and Dick Nadeau of Plymouth, Mass; four grandchildren, Lisa and Joe Valenti, and Chris and Nicole Nadeau; and his nieces and nephews, Virginia Pascucci Mico, Jerry Pascucci, Michelle Bond, and Mario, Cyril, and Anthony DeFazio.

Visitation will be Monday, February 25th, from 4-8 p.m. at Woolley-Boglioli Funeral Home, 10 Morrell St., Long Branch. A Funeral Mass will be offered at 10 a.m. Tuesday, February 26th, from Holy Trinity Church, Long Branch. Interment will follow in Woodbine Cemetery, Oceanport. Those wishing to remember him may make contributions in lieu of flowers to the St. Jude Children’s Research Hospital or the charity or service organization of your choice.

To leave a condolence, you can first sign into Facebook or fill out the below form with your name and email. [fbl_login_button redirect="https://wbhfh.com/obituary/james-v-pascucci/?modal=light-candle" hide_if_logged="" size="medium" type="login_with" show_face="true"]
×