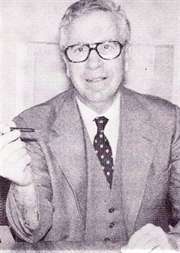 John James Van Wagner, died Wednesday, November 17, 2010 at home in Monmouth Beach. Born June 18, 1924, he was the son of the late Walter and Marie Van Wagner, of Washington, D.C. and Roselle, N.J. 'Van' was a multi decorated World War II Army veteran who served in the Normandy, Northern France and battle of Northern Germany Campaigns. His secondary education included degrees from Rutgers and the American University, Paris, France. For most of his life he was associated with the Contracting Engineering Business and was C.E.O. for Conrad Hanson and Company Inc. and later for Saxon Contruction and Management Corp., unitl his retirement in 1995. He was pre-deceased by his wife Barbara A. Bowers Van Wagner in 2003. Surviving is his beloved Edla Collora; two sons and a daughter-in-law, Walter Van Wagner, III and John J. Van Wagner, Jr. and his wife Cynthia; and he was the beloved grandfather to Reid, John, III and Olivia Van Wagner. Visitation will be Sunday, November 21st, 2-4 and 7-9 PM at the Woolley Funeral Home, 10 Morrell Street, Long Branch. The funeral mass will be celebrated Monday, November 22nd, 9:30 AM at the Church of the Precious Blood, 72 Riverdale Avenue, Monmouth Beach, NJ. Entombment will follow at Woodbine Mausoleum, Oceanport. Those wishing may make contributions in Mr. Van Wagner's memory to a charity of your choice. You may light a candle of condolence by visiting www.woolleyfh.com.

To leave a condolence, you can first sign into Facebook or fill out the below form with your name and email. [fbl_login_button redirect="https://wbhfh.com/obituary/john-van-wagner/?modal=light-candle" hide_if_logged="" size="medium" type="login_with" show_face="true"]
×