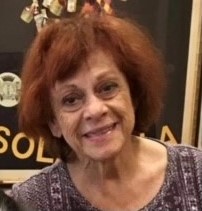 She was born in 1940 to the late Patricia and Nicholas Grasso in Long Branch.

Marie attended Star of the Sea Academy and then graduated from Red Bank Catholic High School. After high school, she graduated as a beautician from Park Beauty School in Newark and began working for her Aunt Jenny and Uncle Tommy in their beauty shop in Matawan.

She married the love of her life, Augustine DeVito in 1961 and while raising her family, worked part time for Seashore Nursery School, as well as Kmart corp and finally as the director of music for Christ the King Parish. After retirement, she continued singing in the choir.

Marie enjoyed crocheting, gardening, bowling, the beach, and watching the Mets. She was a devout Roman Catholic, attending church several times a week, and volunteered for the St. Vincent de Paul Society.  She embraced everyone she met and treated them like family with her outgoing personality and huge heart.

Marie is predeceased by her loving husband Augustine DeVito, her parents, her sister Barbara Grasso, brothers-in-law John DeLisa and Joseph DeVito, paternal grandparents Stefano and Annunziata Grasso, maternal grandparents Frank and Anna Vecchio, Aunt and Uncle Rocky and Lolly Giampa, and many other Grasso and Vecchio aunts and uncles.

In lieu of traditional remembrances, Marie’s family requests that donations in her name be made to the Society of St. Vincent de Paul, 408 Prospect St., Long Branch, NJ 07740.

For messages of condolence or to share a favorite memory, please visit Marie’s page of tribute at www.WoolleyBoglioli.com.

To leave a condolence, you can first sign into Facebook or fill out the below form with your name and email. [fbl_login_button redirect="https://wbhfh.com/obituary/marie-a-de-vito/?modal=light-candle" hide_if_logged="" size="medium" type="login_with" show_face="true"]
×