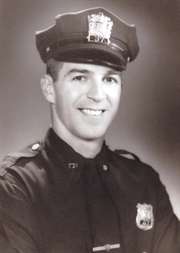 Michael A. Irene, 84 of Long Branch, a retired Detective Captain of the Long Branch Police Department, passed away Friday January 13th at Riverview Medical Center, Red Bank. Det. Captain Irene graduated Long Branch High School and enlisted in the U.S. Navy during World War II, where he served as a Radarman on the U.S.S. Cooner in the Pacific Theatre. He was Honorably Discharged from the Navy on the 29th day of July 1946. In 1954 he joined the Long Branch Police Department where he served 25 years retiring with the rank of Detective Captain. He later worked for the Monmouth County Office on Aging, before retiring to Ft. Pierce, Florida where he lived for 12 years. He returned to New Jersey in 2009. He was pre-deceased by his wife, Ann Ferrara Irene in 2007; and his sister and brother-in-law, Mary and Joe Foerster, whom both died in 1954. Surviving are two sons and daughters-in-law, Michael and Angela Irene, Elberon and Thomas and Barbara Irene, Cary, N.C.; and his four grandchildren, Amanda, Michael, Justin and Rebecca Irene. A gathering in Celebration of his life will be held from 2 to 5 PM, Saturday, January 21st at the Woolley Funeral Home, 10 Morrell Street, Long Branch. A Long Branch PBA service of remembrance will be at 3 PM. Contributions in memory of Detective Captain Irene may be made to the Long Branch PBA, City Hall, 344 Broadway, Long Branch, NJ 07740. You may light a candle of condolence by visiting www.woolleyfh.com.

To leave a condolence, you can first sign into Facebook or fill out the below form with your name and email. [fbl_login_button redirect="https://wbhfh.com/obituary/michael-a-irene/?modal=light-candle" hide_if_logged="" size="medium" type="login_with" show_face="true"]
×