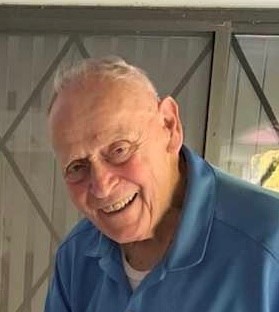 Dick was born and raised in Elizabeth. He and his family settled in Scotch Plains then Fanwood, where all their children were raised, eventually moving to Marlboro in 2001. He was a graduate of Thomas Jefferson High School, in Elizabeth, and Rutgers College of Engineering. He entered the US Air Force in 1953 and served active duty and reserve until 1991, retiring as a Major. Dick went on to earn a Master’s Degree in Education, with a concentration in Physics, from Seton Hall University.

He began his career at Lockheed Electronics as an Electrical Engineer, working on teams that secured 5 different patents, one of which was for testing Polaris Missiles. After a stop at Honeywell, Dick moved to Burroughs, the computer company (Unisys), as a Production Manager, where he traveled extensively nationwide working on corporate production issues. During his tenure at Burroughs, he returned to Seton Hall to earn his Master’s in Education and pursue his love of teaching. In 1978, Dick left the corporate world to begin his career in education at Manville High School, moved to Westfield High School, before settling in at Hoffman HS in South Amboy, where he taught science and math, and was named “Teacher of the Year”. He also began teaching Physics and advanced Math courses at Union County College and eventually became a full Professor at the college, before retiring. He published a textbook while at Union County College: Science Milestones; Knowing & Being.

Being an engineer who was naturally curious and analytical, Dick enjoyed fixing the family cars and things around the house (appliances and anything else he could get his hands on). He and his wife Joan and their children, enjoyed family vacations together each summer. Dick and Joan would later travel throughout Europe, including an archaeological dig in France, and visited every state in the U.S. He loved bacon-wrapped filet mignon, and pizza, but his favorite was ice cream, especially butter pecan and maple walnut, but any ice cream would do (it was his source of calcium…) He was a fan of the show NCIS and enjoyed the big band sounds, especially the Glen Miller Orchestra, but Christmas music and military marches were his favorites. He and Joan loved dancing at weddings, or anywhere else, with a fondness for the jitterbug.

Dick was a person with a great big heart who would help anyone who needed it, whether it was regarding schoolwork, or volunteering anytime a school or church needed people, or helping his neighbors; even pulling over on the side of the road to help a stranded motorist. He never said no to anyone who asked. He served as a Lector for over 50 years at St. Bartholomew’s in Scotch Plains and St. Gabriel’s in Marlboro. Dick was also very active coaching his children’s baseball, basketball and other teams.

His greatest passion was reserved for his wife and family. Dick never missed a graduation, wedding, sacrament or other ceremony involving his children, grandchildren or great-grandchildren, traveling all over the U.S. for their events. He enjoyed bringing as many together as he could for holidays and birthdays.

He was pre-deceased by his grandson, Christopher Luis Bonner in 2005.

To share a favorite memory or send messages of condolence, please visit Dick’s page of tributes at www.holmdelfuneralhome.com. Donations cane be made, in his honor to: St. Jude Children’s Research Hospital or St. Gabriel’s RC Church in Marlboro, NJ.

To leave a condolence, you can first sign into Facebook or fill out the below form with your name and email. [fbl_login_button redirect="https://wbhfh.com/obituary/richard-w-bonner-sr/?modal=light-candle" hide_if_logged="" size="medium" type="login_with" show_face="true"]
×