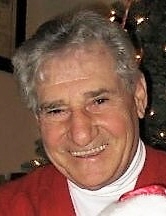 Robert was born in Newark on November 28, 1932 to John and Carmella Cantalupo. Robert spent his youth in New Brunswick and was a 1951 graduate of St. Peter’s High School. There he played football, basketball and baseball and was a three sport letterman. Following graduation, Robert answered the call to serve his Country during the Korean War and enlisted in the United States Air Force. Following his Honorable Service to his Country, Robert moved to California to live with his brother Emil “Sonny” Cantalupo, a World War II veteran who served in the North African Campaign, and his sister-in-law Lucy (nee Corbo). While in California, Robert worked as a bartender in his Uncle’s tavern and attended and graduated from East Los Angeles College, Monterey Park, California. Following graduation, Robert returned home to New Jersey and fell in love with and married Hope “Rhoda” Sabb. Rhoda and Robert had two boys, Robert John Cantalupo (1969) and John Michael Cantalupo (1972). Rhoda unfortunately passed at the young age of 47 after a long battle with cancer and Robert shouldered the raising of his boys as a single parent, never remarrying. Robert had an incredible devotion to his family and sacrificed at every turn for the good of his family.

Robert worked for the Federal Reserve Bank as a Bank Examiner for most of his adult life. He also served as a Vice President in the loan departments of Marine Midland Bank, New York City, and Carteret Savings Bank, Morristown, NJ, prior to retirement. In addition to working as a banker, Robert also owned Victory Taxi Cabs in New Brunswick, NJ and served as the President of the Victory Taxi Association. Robert enjoyed an extremely active retirement golfing, completing crossword puzzles and following his favorite sports by season.

Although Robert had many successes in life, his greatest pride and joy was his family, which included his two boys and five grandchildren. Robert was the ever present father and grandfather and was often seen roaming the sport fields, courts, ice rinks and school theaters cheering on his children and grandchildren. Robert is survived by his two boys, Robert and wife Michele Cantalupo and John and his wife Victoria Cantalupo, and his five grandchildren, Mark, Christian, Brezdyn, Isabella and Sophia. Robert was predeceased by his wife Hope Rhoda (nee Sabb).

To leave a condolence, you can first sign into Facebook or fill out the below form with your name and email. [fbl_login_button redirect="https://wbhfh.com/obituary/robert-j-cantalupo/?modal=light-candle" hide_if_logged="" size="medium" type="login_with" show_face="true"]
×