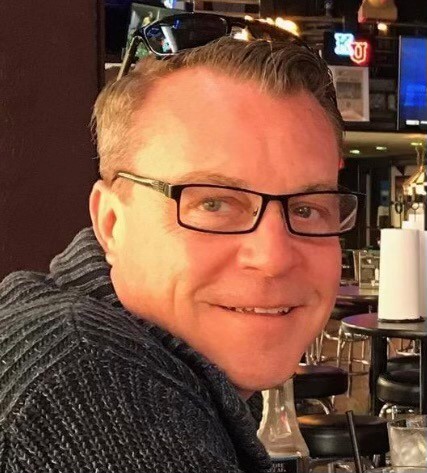 Rob Collins, 54, of Los Angeles, California (formerly of Monmouth County, N.J.) passed away suddenly in his home in Culver City on Tuesday, March 30, 2021.

Rob had been in the food service industry for over 35 years. He had held several managerial positions both in New Jersey and California. Rob was employed by C&O Trattoria in Culver City but sadly they recently closed their doors (after 28 years) due to the Covid-19 pandemic. Prior to moving to California Rob was employed by The Super Foodtown as the catering manager at the Oakhurst location in New Jersey. His service industry career was diverse including his robust energy representing Foodtown at the Ocean Township Italian American Festival for many years. His giving nature and experience in an industry he loved was always welcoming. He was seasoned in his career and had been employed by many popular spots in Monmouth County. He was well known to his regular customers as one of the restaurant managers at the Old Orchard Country Club in Eatontown N.J.

His roots were formed alongside his family in the Cliffwood section of Aberdeen. He attended St. Joseph’s in Keyport until the 4th grade when his family moved overseas to The Philippines in 1977.  After residing overseas his family moved to Charlotte, North Carolina. A few years later his family moved back to Monmouth County and resided in West long Branch.  Rob attended Frank Antonides and worked summers at the Long Branch Pier Waterslide. He later graduated from Shore Regional High School, class of 1985. During summer break after high school Rob worked at Show Place Farms, Millstone, caring for over 400 horses as a hot walker and other various duties. Rob attended Bryant College in Rhode Island and graduated from the accounting program in 1989. He performed in many College Theatre Productions while attending Bryant College (now University).Bryant College will forever be known as where Rob got the service industry calling. He remained on campus during summer breaks to feed the New England Patriots when they used the campus for training camp.  Upon returning to New Jersey after attending college he worked as a sub at ARC/ The Work Opportunity Center, Long Branch part time by day and his humble beginnings of the restaurant business at Casey Jones Long Branch, N.J. by night.

Rob was a communicate of St. Augustines Catholic Community in Culver City, California.  He was known to his church community as a a hard working volunteer and was devoted to his faith. Rob served as a lector and was praised for his ability to multi task when needed. He continued supporting his love for the theatre. He was subscribed as a season ticker holder for many performances at the Ahmanson Theatre in Los Angeles.

Rob was predeceased by his mother Bette J. Collins in 1982 at the age of 51 and his father Robert J. Collins former Administrator of Monmouth County in 2008 at the age of 70.  Rob was also predeceased by his life partner Charles F. Schreck III, in 2010 at the age of 54.  He is survived by his step mother, Kathryn B. Collins, Interlaken;  his loving and devoted sister Kathleen Collins Peterson, Oakhurst; his brother in law Craig of Oakhurst.  He is also survived by his loving nephew Connor Robert Peterson of Brooklyn, N.Y. and his niece/God Daughter who he shared a tremendous special bond with, Kaitlyn Elizabeth Peterson of Oakhurst. Also his dear Aunt-Peggy (Margaret J.) Collins of Matawan, his Uncle and Aunt William V. and Maureen D. Collins of Keyport and his Uncle /Godfather John (JP) and Aunt Vicky Collins of Forked River.  His incredibly selfless friend Courtney Ullery of Los Angeles (originally from Monmouh County, N.J), His best friend Christopher Fernicola of Los Angeles (Formally of Monmouh County) and his childhood friend Peggy Lackner of Long Branch, N.J. He will be lovingly remembered by his many cousins, family members, God Children and loyal friends on both coasts. His Irish eyes will smile from above and his quick wit and ability to always offer a joke or tale will be forever in our hearts.

Funeral service Saturday, May 15th 11:00 am at Trinity Episcopal Church, 503 Asbury Avenue, Asbury Park, NJ.  Due to covid restrictions, Trinity Episcopal Church requires preregistration for those wishing to attend Rob’s service.  To attend, you must register at https://events.r20.constantcontact.com/register/eventReg?oeidk=a07ehxt2hd374f17108&oseq=&c=&ch= .

To leave a condolence, you can first sign into Facebook or fill out the below form with your name and email. [fbl_login_button redirect="https://wbhfh.com/obituary/robert-j-collins-ii/?modal=light-candle" hide_if_logged="" size="medium" type="login_with" show_face="true"]
×