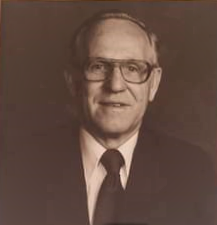 The funeral procession will leave the funeral home for the Fire Department Honors for Ex-Chief Volmer at 9:15 am.

Known to many as Uncle Rob, he will be remembered as a loving, kind, considerate man whose love for his family and the Long Branch Fire Department will never be forgotten.

Rob served proudly in the U.S. Navy during World War II in the Pacific Theatre. He proudly would say he was a “member of the Greatest Generation.”

In 1968 he settled in Eatontown, where he became an active member of St. Dorothea’s RC Church and served as an Usher. Rob would volunteer every Thanksgiving to give out baskets of food to those less fortunate. He was an avid runner for many years, and enjoyed cooking, especially his Pasta Fagioli and Pea Soup. Rob enjoyed baseball and was an avid fan of the New York Yankees and a member of the Long Branch Old Guard. He enjoyed the music of the Big Band Era and would often turn the music on and dance with anyone in his apartment.

He was pre-deceased by his first wife, Elizabeth Volmer and his second wife, Nancy Volmer; his parents Margaret and Edwin Volmer; his siblings, Edwin Volmer, Jr., Dorothy Corvino, Constance Miller and Kenneth Volmer; as well as Dan McCaffrey, Jack McCaffrey and Dennis McCaffrey.

Visitation Friday Dec. 18th, 5 pm until the time of the funeral service at 7 pm at the Woolley-Boglioli Funeral Home, 10 Morrell Street, Long Branch. On Sat. Dec. 19th, the funeral procession will leave the funeral home for the fire department honors for Ex-Chief Volmer at 9:15 am. Entombment services will be at 10 am at Woodbine Mausoleum, Oceanport. In lieu of flowers please contribute to the Foodbank of Monmouth County, Fulfill at www.fulfillnj.org.

To share a favorite memory or send a message of condolence please visit www.woolleyboglioli.com.

To leave a condolence, you can first sign into Facebook or fill out the below form with your name and email. [fbl_login_button redirect="https://wbhfh.com/obituary/robert-w-volmer/?modal=light-candle" hide_if_logged="" size="medium" type="login_with" show_face="true"]
×

The funeral procession will leave the funeral home for the Fire Department Honors for Ex-Chief Volmer at 9:15 am.