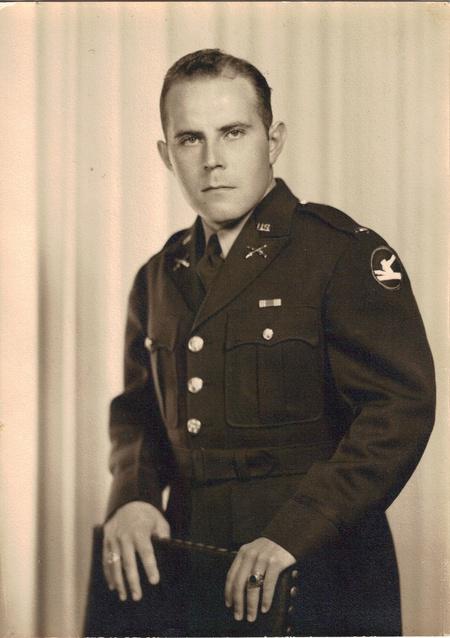 SAMUEL GRIFFIS KARN, 87, of HOLMDEL, passed away on Tuesday November 10th, 2009 at the Bayshore Community Hospital in Holmdel. He was born and lived in Morristown, NJ, prior to moving to Holmdel in 1960. Mr. Karn was employed by Liberty Mutual Insurance Co., So. Plainfield , NJ as a Claims Adjuster and Claims Manager from 1947 until his retirement in 1985. After retirement, he was employed by Dearborn Farms, Holmdel, NJ as a Stockman from 1985 until 2001. He always spoke fondly of the Lucarelli family and especially his friend Dominic Lucarelli. He attended Virginia Polytechnic Institute, Blacksburg, VA. As a member of the Corps of Cadets from 1940 until 1943. Commissioned a 2nd Lieutenant in the 84th Infantry Division, United States Army in 1944., he fought in the European Theater of Operations, and participated in the liberation of France, Belgium, and Holland. He was a Veteran of the Battle of the Bulge and the Ardennes. He was awarded the Combat Infantryman's Badge and the Bronze Star. He returned to the United States in 1945 and was honorably discharged as a 1st Lieutenant. Mr. Karn earned a Bachelor of Science in Business Administration in 1947 from VPI. Due to his military service, he was still considered a member of the Class of 1944. He was a member, Past Treasurer and Lay Reader at St. Mary's Episcopal Church, Keyport, a member and Past Commander of American Legion Post 59, Morristown, NJ, member of VFW Post 5918 Holmdel NJ, former member and Past President of Holmdel Kiwanis Club. Mr. Karn was predeceased by his wife Frances in 1982, and his brother Donald Wesley Karn, killed in action World War II, ETO. Surviving are two sons S.Gregory Karn of Howell, NJ, Donald Karn, of San Juan Capistrano, CA., six grandchildren and his former wife Jean Gorman of Princeton, NJ. Visitation will be on Thursday from 4 to 7 PM at the Holmdel Funeral Home, 26 South Holmdel Road, Holmdel NJ. Funeral Services will be at 10:30AM on Friday at St. Mary's Episcopal Church 10 East Front Street, Keyport NJ. Interment will follow at the Evergreen Cemetery, Morristown, NJ. Donations in Sam's memory may be made to the Kiwanis Club of Holmdel, P.O.Box 114, Holmdel, NJ 07733.

To leave a condolence, you can first sign into Facebook or fill out the below form with your name and email. [fbl_login_button redirect="https://wbhfh.com/obituary/samuel-g-karn/?modal=light-candle" hide_if_logged="" size="medium" type="login_with" show_face="true"]
×