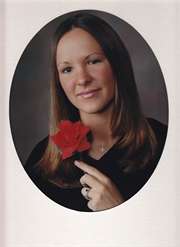 Sergeant Shauna Brocklebank Adams, 27, of Long Branch passed away Wednesday, March 28th at Pyeongtaek, Korea. Shauna was a lifelong resident of Long Branch. She was a 2003 graduate of Long Branch High School where she was in the National Honor Society and played varsity field hockey and lacrosse. Shauna then went on to Montclair State University, where she was a 4 year outstanding lacrosse player on the varsity team. She graduated in 2008 with B.S. degree in Nutrition and Food Science. Shauna was well loved in her hometown of Long Branch. In 2010, Shauna enlisted in the U.S. Army and she was recently promoted to Sergeant. Shauna was currently serving in Korea. Surviving is her husband, Kyle Adams, whom she married on February 15, 2012 and is currently serving in the U.S. Army in Afghanistan; her parents, Nancy and Matt Brocklebank, Long Branch; her sisters, Maggie and Randi Brocklebank, at home; her maternal grandparents, Robert and Janet Frampton, Toms River; her paternal grandparents, Paddy and Buddy Brocklebank, Oceanport; her mother and father-in-law, Janet and Lenny LeBlanc, Thibodaux, La; and her brothers-in-law, McCade and Logan. Visitation will be Friday, April 6th 2 to 4 and 7 to 9 PM at the Woolley Funeral Home, 10 Morrell Street, Long Branch. Funeral services will be Saturday, April 7th, 11 AM at the funeral home. Shauna's family asks that contributions be made to the Neo-Natal Intensive Care Unit/ Monmouth Health Care Foundation, 300 Second Avenue, Long Branch, NJ 07740. You may light a candle of condolence by visiting www.woolleyfh.com.

To leave a condolence, you can first sign into Facebook or fill out the below form with your name and email. [fbl_login_button redirect="https://wbhfh.com/obituary/shauna-brocklebank-adams/?modal=light-candle" hide_if_logged="" size="medium" type="login_with" show_face="true"]
×