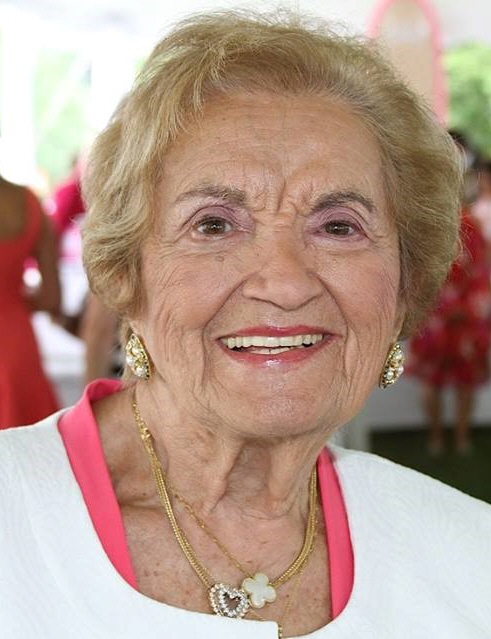 Sonia Knopf, affectionately known as Grandma and Bubbe, passed away on July 18, 2017, surrounded by family at the age of 95. Sonia was born in Romania to Abraham and Rachel Weiner, grew up in Brooklyn, and spent most of her adult life in North Woodmere, NY.

Sonia’s greatest joy was her family. She is predeceased by her late husband, Max Knopf; her siblings, Ben Weiner, Tessie Tendler, and Dottie Myers; and her beloved grandson, Paul Knopf. She is survived by her husband, Meir Reichman; her four children and their spouses, Michael and Norma Knopf, Woody and Claire Knopf, Phyllis Knopf and Rabbi Yaakov Adler, Marshall and Janice Harrington-Knopf; her 11 grandchildren; her 6 great-grandchildren; her younger sister, Irene “Bebe” Pearl; many nieces, nephews, and cousins; and her devoted caregiver, Helen Wilson.

Sonia was the proud matriarch of her family, always teaching her children to stay positive and, above all, to stick together. Her homemade kreplach, kugel, blintzes, and verenikas were the soul of every holiday meal and no occasion was complete without a personalized poem presented by Grandma. Sonia believed there were four criteria for a long life, “a sense of humor, to be passionately involved with something that you love, a positive attitude, and the ability to sustain a loss and change.”

Sonia’s passion was her volunteer work with the youth and elderly in her community. In 1992, the National Council of Jewish Women named Sonia “Woman of the Year” and in 1995, Sonia was named New York State’s “Mother of the Year.” Both of these accolades honored her tireless dedication to helping those in need. Sonia devoted her time and energy to lifting the spirits of “her seniors,” even long after she was a senior herself.

Sonia was a woman of endless chutzpa, determination, and self-confidence, graduating college in her mid-50s and earning her Master’s Degree in Education shortly thereafter. Her adoring family has learned so much from her love of life and will always deeply love their, as she would say, “sweet, adorable grandma.”

The funeral for Sonia Knopf will take place tomorrow, July 20th, at 9AM at the Woolley-Boglioli Funeral Home, located at 10 Morrell Street, Long Branch, NJ 07740. The burial will be held immediately following the service at the New Montefiore Cemetery, 1180 Wellwood Ave., West Babylon, NY 11704.

Sonia’s family will begin sitting shiva at 7PM on Thursday, July 20th at the home of Marshall and Janice Harrington-Knopf, 11 Blossom Cove Road, Red Bank, NJ 07701. The shiva will continue at their house at 5PM on Saturday, July 22nd. Shiva will conclude on Sunday at 12 o'clock at the home of Woody and Claire Knopf, 72 West River Road, Rumson, NJ 07760.

In lieu of flowers, a donation can be made to the Monmouth Medical Center Foundation, 300 Second Ave., Long Branch, NJ 07740, www.monmouthfoundation.org or to the VNA of Central Jersey Hospice, 23 Main Street Suite D1 Holmdel, NJ 07733, www.vnahg.org. For messages of condolence, please visit www.woolleyboglioli.com.

To leave a condolence, you can first sign into Facebook or fill out the below form with your name and email. [fbl_login_button redirect="https://wbhfh.com/obituary/sonia-knopf/?modal=light-candle" hide_if_logged="" size="medium" type="login_with" show_face="true"]
×