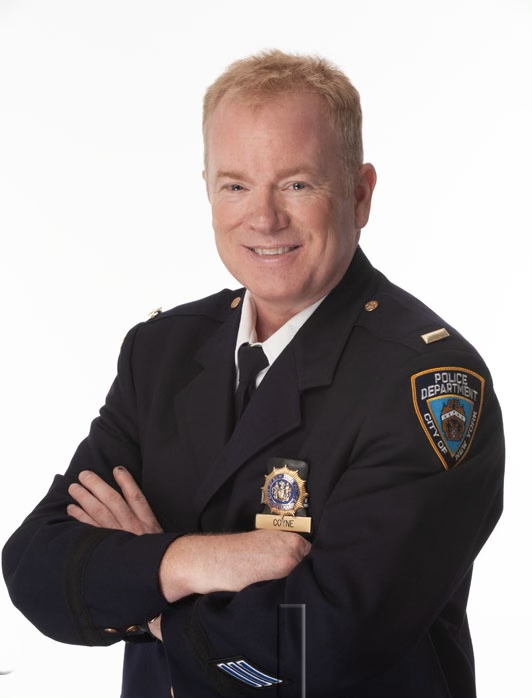 NYPD Lt. Timothy “Tim” Edward Coyne, 56, of New York City and Holmdel, NJ, past away August 12 at his home after years of suffering with 9/11 first responder-related respiratory ailments. His 9/11-related terminal conditions robbed his body of the ability to fend-off the destructive advance of the Delta variant of Covid that, despite his heroic battle, ended his life with a cruel swiftness.

As much as Tim relished a career dedicated to protecting and serving all people in New York City, he loved even more spending time with his children, his extended family, and his friends.  Above all, Tim was a loving father to his daughter, Shia Kramer-Coyne (Brearley School 2023) and his son Timothy “Timmy” Kramer-Coyne (Ranney School 2028). Tim’s children transformed every aspect of his life. Following the devastating aftermath of 9/11, he found his greatest joy: being a dad. He was so proud of them and savored his role as father every minute of the day.

Tim had a zest for life and was a fun-loving character that embraced the people he loved.

Born on December 31, 1964 – literally Brooklyn’s last Baby Boomer — and raised in the Flatlands neighborhood, Tim grew up on Troy Avenue and attended St. Thomas Aquinas Elementary School and Nazareth High School, where he was a varsity swimmer. In the pool, Tim won the 1982 New York State Championship in the backstroke. His accomplishment helped win Tim a full scholarship to St. Francis College, where he was also a member of the varsity water polo team. Tim’s love of the water also led him to serve for over a decade as a member of the esteemed lifeguard patrol at Rockaway Beach.

Upon his college graduation, Tim worked as a trader for Merrill Lynch at the New York Stock Exchange. Although on a path to a successful career in finance, Tim left Wall Street to enter the NYPD Academy to pursue his dream of protecting and serving all New Yorkers.

Tim was raised in a family that valued service: his father, a U.S. Army veteran, was permanently disabled after being shot during a fierce battle in Germany during World War II. Tim, the youngest of five brothers, was a born scrapper and protector, often regaling friends with epic tales of using those traits even as a kid because, he would say, he had to fight at the dinner table against his older brothers to secure a single lamb chop off the serving platter.

In 2001, quickly rising through the ranks of the NYPD, Tim, then a sergeant assigned to the 1st Precinct in Lower Manhattan, quickly found himself on Sept. 11 helping people racing for their lives from the crumbling Twin Towers. Tim logged an extraordinary number of daily extended shifts — month after month—managing the makeshift morgue at Ground Zero. Tim, promoted to lieutenant, would later transfer to the Midtown South Precinct running the “midnights”, and then served as the head of the Manhattan Traffic Task Force that included the Mounted Division, Crash Investigations, and Emergency Services.

But just months after 9/11, Tim’s health deteriorated due to the poisons in the air around Ground Zero where Tim, like many of his heroic colleagues, had worked.

Tim was a one-in-a-million character, always full of jokes and laughter. He loved life and made-up for the challenges of his youth on the streets of Brooklyn by living a life of joy and spontaneity while always making it his business to help anyone being treated unfairly or needing a hand. He will be endlessly missed by his family and friends.

Visitation will be Sunday, August 22, from 2:00 pm to 8:00 pm at the Holmdel Funeral Home, 26 South Holmdel Rd, Holmdel. A mass will be offered Monday, August 23, at 10:30 am at The Church of St. Catharine, 108 Middletown Road, Holmdel. Burial will follow at Mt. Olivet Cemetery, Middletown. The service will respect all Covid-related protocols for everyone’s safety.

This is a line-of-duty death and the NYPD will be honoring Lt. Coyne with a funeral that includes the full mourning protocols of the NYPD’s Finest including the processionals, dress-blue fellow officers in attendance and fly-overs that are New York City’s traditions surrounding its fallen NYPD heroes — both during the service and burial.

Family and friends of Tim and his children are invited for repast at his home, 17 Huntley Road, Holmdel NJ. Tim would want this to be a big celebration of life; please join us for drinks and food! In order to give time for everyone to share in Tim’s memory and have the opportunity to come and pay their respects, the family will happily be welcoming guests at all times between 1:00 pm until 11:00 pm on Monday, August 23rd.

It is with the greatest hope that Lt. Coyne may now Rest-In-Peace and that his memory be a blessing for all the years to come.

To leave a condolence, you can first sign into Facebook or fill out the below form with your name and email. [fbl_login_button redirect="https://wbhfh.com/obituary/timothy-edward-coyne/?modal=light-candle" hide_if_logged="" size="medium" type="login_with" show_face="true"]
×