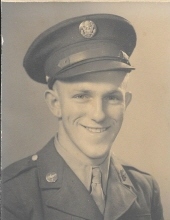 Born in Long Branch on January 8, 1924 to William and Emma (Hampton) Colmorgen, he lived most of his life in the Long Branch and Red Bank area before moving to West Long Branch. Prior to his retirement he worked for many years at Mid Atlantic Beef in Long Branch.

Walter was drafted into the United States Army on January 30, 1943. When he was asked recently how he felt about being drafted he replied, “I wanted to serve because there is over 1,000 of our guys buried at Pearl Harbor.” He was honorably discharged on March 21, 1946 after serving in Burma as a Heavy Machine Gunner with the 682 AAA MG Battery. He was awarded the Asiatic Pacific Campaign Medal, Good Conduct Medal, American Campaign Medal and the WWII Victory Medal.

He was pre deceased by his brothers, Howard, Wally, William and Clarence and his sisters, Sarah, Dora and Ruth.

Surviving are several nieces and nephews.

To leave a condolence, you can first sign into Facebook or fill out the below form with your name and email. [fbl_login_button redirect="https://wbhfh.com/obituary/walter-colmorgen/?modal=light-candle" hide_if_logged="" size="medium" type="login_with" show_face="true"]
×