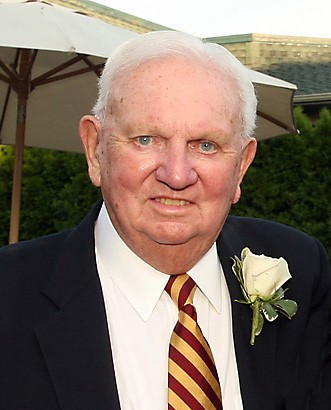 After 92 years of living life to the fullest, the best description of Walter J. O’Neill, Sr., is that he had unique gift of making it easy for people to confide in him, and the greater skill of solving their problems.

Walter was born on December 11, 1928 in Bayonne, New Jersey. He was the second son of Josephine (Sweeney) and James O’Neill. Living through the depression was tough on his family. His dad was injured in the Great War and worked as a lead burner while his mom was a seamstress. Walter dropped out of school to work and support his family.

“I was a young kid working at a hardware store on the boulevard where I would have to lift and carry 200 pound bags of nails, and only weighed 130 pounds,” Walter would say. For the next 55 years, Walter never stopped working. After the hardware store, at age 16 he went and worked at the Bayway Refinery as a bike messenger, running documents all over the plant.

Walter would tell the story about how one day on his way to deliver a letter to the office of the refinery manager, he saw paper on the floor, so he picked it up and tossed it in garbage. He didn’t know the manger was watching, and inquired who was the kid. That innocent act of picking up someone’s trash got him promoted from the bike to an office. Working full time as a teenager supporting his family and going to night school was hard, but he never complained. After high school he attended Seton Hall and earned his degree. Walter enjoyed over 40 years with Esso/Exxon, and retired as Vice-President of Human Resources.

Walter was a pioneer in his field according to Ebony Magazine. Exxon hired more minority executives than any other large corporation at the time. Walter knew the importance of diversity long before it became a talking point in today’s culture.

“I reached for a star and God gave me the brightest one in the sky,” is how Walter referred to the love of his life, Judith P. Cignarelli. For those two it was love at first sight, however, it took some time for the two very ethnic Irish and Italian families to recognize their love. The families were eventually won over and on August 16, 1958 the two were married in St. Aedan’s Church in Jersey City.

Walter and Judy then proceed to have five children in seven years. For Christmas one year the couple sent out cards that read Judy and Walter and their five rhythm children. “Every time I learned the rhythm, Judy would change the tune,” he would say.

The couple moved to Oceanport with their first two sons, Walter Junior and Mark. Michael, Donna and Paul made up the rhythm five and enjoyed a wonderful life with their parents. “Out of five children, my husband only changed one diaper,” Judy said. She added that it made him so sick that he couldn’t do it. Back in 1959 they had a diaper service as they were cloth. “Walter took the dirty diaper and threw it into the incinerator. I said ‘what you doing we have to pay for that!”’

When Walter’s mother Josephine was 82 years old she was unable to live alone in Bayonne, so Walter and Judy had her move into their home. It was a full house with the rhythm five, grandma and the dog. However, Walter and Judy didn’t hesitate, as it was the right thing to do.

Judy and Walter loved to vacation and made sure it was always a family and educational trip. They purchased a 22-foot trailer, hooked it up to the family station wagon and hit the road. From Florida to Canada, every year they would travel the country.

Neighbors seemed to gather at the O’Neill house and would sit with Walter and talk his ear off, but he always listened and would help in whatever way he could. Most times that was financially. “My dad was always handing out money to those in need and never asked for anything in return,” said Walter junior. He added that his dad would say; “Don’t worry, I’m writing it down on the ice.”

Walter was retired from Exxon, but working in New York City for an outplacement company working with high paying executives when the attacks of 9/11 occurred. His golden ear and huge heart was needed, and he was called into duty as a grief counselor during those horrible months that followed.

Convertibles was Walter’s passion. Since he was able to drive he had a rag top, his last being a 2000 Chevy Camaro. Judy and Walter purchased cars, paid for college and gave each of their five children money towards their homes. And that generosity continued onto their grandchildren and great grandkids.

“When I moved down to South Carolina two years ago, I had an old trunk that was filled with stuff from over the years. I found an envelope full of letters that dad wrote me, every two weeks during my first year at college. They were all handwritten. I was really, really touched by that,” said Mark. “They were great letters, full of advice, anecdotes from home, and questions about what I was doing and thinking.”

“Dad would always say to me, treat all people with respect and dignity,” said Michael. He added that dad would also say remember those people you pass on the ladder of success as you will see them on your way down.

“He always said to me every time you walk into this room you brighten it up. I miss you when you aren’t here,” said Donna, the only girl of the rhythm five.

The youngest of the clan is Paul, who had a funny recollection. “Paul use your head besides using it as a hat rack.”

When you look back on the amazing 92 years of Walter J. O’Neill, Sr., there is a current theme of family, caring, protecting, providing and helping. “Dad had many wonderful and insightful sayings but when things didn’t go right his favorite was something simple,” said Walter junior. “Remember grandma’s philosophy. The hell with it.”

Walter is survived by his loving wife of 63 years, Judy, who lives in Ocean.

To leave a condolence, you can first sign into Facebook or fill out the below form with your name and email. [fbl_login_button redirect="https://wbhfh.com/obituary/walter-j-oneill-sr/?modal=light-candle" hide_if_logged="" size="medium" type="login_with" show_face="true"]
×