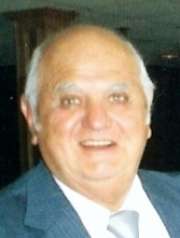 Charles K. Ilvento, 95, of Tinton Falls and Fort Lauderdale, Florida passed away Thursday, January 10, 2013 at home. Charles was born in Brooklyn, NY in 1917. He attended St. Peter's College in Jersey City. Lucille, his beloved wife of 74 years, predeceased him by one and a half years.

Charlie, as he was called by his friends and family, started working in high school at his father's famous restaurant and pizzeria, Ilvento's of Jersey City. He loved the restaurant business and always dreamed of running his own establishment. He met Lucille Carfora on a blind date, and married her on October 24, 1937 in Jersey City. They were steadfast parents and exceptional grandparents, known lovingly as “Ronny and Granddad”.  They moved to Long Branch in 1949 and founded Ilvento's West End Manor and Hotel that same year.  It was their pride and joy for the next 40 years. Charlie and Lucille were the heart and soul of Ilvento's West End Manor and were immensely proud of the restaurant they called home. Lucille and Charlie operated the 11 room hotel and lived above the restaurant where they raised their three children and enjoyed a lifetime of family celebrations.  Originally a 12 ft bar, four booths and a room of six tables, Charlie and Lucille built the West End Manor into a grand restaurant with a thirty foot bar, banquet halls and dining areas that could hold up to 400 people. “Mr. I” – as his many customers and friends affectionately called him –,was famous for wearing all the hats of the restaurant trade and then some. Weddings, bridal and baby showers, and charity events were celebrated at the West End Manor for four decades. “Mr. I” enjoyed running into his many customers years after retirement; they all thanked him profusely and recounted their special memories of Ilvento’s. He also enjoyed the many celebrities who dined over the years at the famous Jersey Shore spot — Carol Burnett, Milton Berle, Joe DiMaggio, Albert Finney, Whitey Ford,Diana Ross and many others always made time for a meal at Ilvento’s. The Restaurant was recommended by Gourmet's Guide to Good Eating and was awarded four chef hats by the New York Daily News.

Charlie's oldest son, Joseph, co-managed the restaurant and eventually they became partners. This allowed Lucille and Charlie time to travel. They loved exploring new places all over the United States and across the globe. Their favorite spots included Italy, Cuba and South America. After retirement Lucille and Charlie became snowbirds, wintering in Fort Lauderdale, Florida and summering at The Admiralty in Monmouth Beach , NJ. Charlie was a fixture every morning at The Mart, in Monmouth Beach, where he could be found at 5 am enjoying his morning group and coffee. Charlie was an avid boater who adored his beloved boat the WEMANOR. He and Lucille spent many years cruising the Fort Lauderdale Intracoastal. He loved a good honest card game with low stakes.The racetrack was one of his favorite haunts, and he also enjoyed Jai Alai and Atlantic City. Charlie was an active member of St. Michael's Church, St. Pius of Fort Lauderdale where he became an Eucharistic minister serving communion every week and later a parishioner of the Church of the Precious Blood, Monmouth Beach. He was on several advisory boards including Monmouth College, the Shadow Lawn Building and Loan Association and the New Jersey National Bank. He was past President of the Long Branch Exchange Club, the Unico Club, The Long Branch Chamber of Commerce, The Restaurant Association, Elks Club and Christopher Columbus Club. His many honors include the “Book of Golden Deeds Award” given by The Long Branch Exchange Club to individuals who exemplify extraordinary charity work; the Long Branch Education Association’s Award for outstanding community service, “Father of the Year” by the West End Business owners group, and the Long Branch Chamber of Commerce's prestigious Louis Labutti Award..

Charlie and Lucille were very generous supporters of many organizations and charities. Charlie was a lifelong honorary member of the Elberon First Aid Squad and celebrated 50 years in 2000 as a member of the Long Branch Volunteer Fire Department. Lucille and Charlie were members of Deal Golf and Country Club and the Coral Ridge Yacht Club of Fort Lauderdale, Florida. In 2008, Lucille and Charlie moved to SeaBrook Village in Tinton Falls. Charlie was a remarkable man — an amazing storyteller, with a great memory who believed strongly in hard work. His commanding presence and keen sense of occasion left a lasting impression on everyone around him. His distinct sense of style — always wearing a Bolo tie and hat, and never without a cigar until the 90's – will not be forgotten.

Charlie’s greatest pride was his family, and he especially adored his role as patriarch for the extended Ilvento family.  He was known for his words of wisdom at the head of the dinner table. He loved a good joke and was a master of witty “one liners”. Those of us who knew and loved him feel fortunate to have had this striking larger than life individual with us as long as we did.  His example will live on in our lives and memories. He will be greatly missed. He was predeceased by his parents, one brother, two sisters and a grandson, Charles Ilvento III, in 1986. And as he affectionatley said, “He was predeceased by his many “skinny friends”. He is survived by his brother, Peter Ilvento and his sister Grayce Kautz; his three children; two sons and their spouses, Joseph and Ann Ilvento, Del Ray Beach, Florida, Charles and June Ilvento, Bal Harbor, Florida; his daughter and son-in-law, Rosemary and Carmen Penta, West Long Branch; nine grandchildren and their spouses, Joseph and Tracy Ilvento, Robert and Jeanne Ilvento, Gregory and Jackie Ilvento, Christopher and Amy Ilvento, Andrew and Amanda Ilvento, Lauren Ilvento, Kristin and Michael Arvanitis, Michael Penta, Jonathan and Paula Penta; 15 great-grandchildren, Morgan, Carly, Alex, Nicholas, Julianna, Bella, Joey, Michael Ilvento and Mia Ilvento; Timothy Curtin; Sophia, Eleni and Zoe Arvanitis; Nicholas and Michael Penta; and numerous nieces and nephews. Visitation will be 4-8pm , Thursday, Jan. 17 at the Woolley-Boglioli Funeral Home, 10 Morrell St., Long Branch. A mass of Christian Burial will be held 10am Friday, Jan 18 at the Church of the Precious Blood, Monmouth Beach. Entombment in Woodbine Mausoleum, Oceanport. In lieu of flowers donations in Charlie's memory may be made to The Greater Long Branch Chamber of Commerce , 228 Broadway, Long Branch, NJ, 07740 or SEARCH Auxiliary for Autistic Children, c/o SEARCH Day Program, 73 Wickapecko Drive, Ocean,NJ 07712. You may light a candle of condolence by visiting www.woolleyboglioli.com.

To leave a condolence, you can first sign into Facebook or fill out the below form with your name and email. [fbl_login_button redirect="https://wbhfh.com/obituary/charles-ilvento/?modal=light-candle" hide_if_logged="" size="medium" type="login_with" show_face="true"]
×