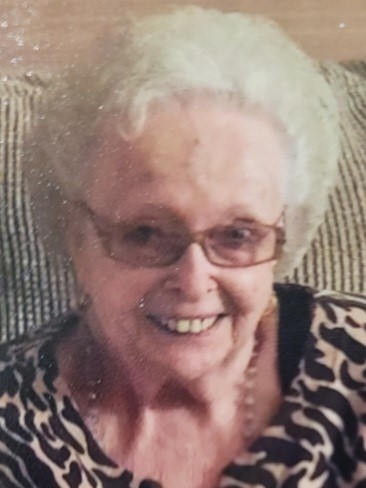 Charlotte Virginia King Megill peacefully passed away on July 2, 2022 with family at her side.

Known as “Ginny” to most, she was born in Spring Lake Heights and grew up in Spring Lake. In 1940, she became a confirmed member of St. Andrews United Methodist Church in Spring Lake and had been listed on its “Cradle Roll” shortly after her birth in 1925. She was a 1944 graduate of Manasquan High School and with friends would sing to entertain troops stationed nearby during World War 2. She first trained as a telephone operator with New Jersey Bell Telephone Company shortly after World War 2 and again worked in that capacity beginning in the 1970s at Ft. Monmouth, eventually retiring in 1995 as a civilian employee of the Department of the Army. She continued to work there as a telephone operator for civilian contractors after her federal retirement, finally retiring for good when she was 80. Her favorite part of this work was in helping members of the armed forces serving throughout the world make “morale calls” to their loved ones back home in the States.

Ginny was an avid reader and enjoyed fiction as well as keeping up with current events, especially politics and anything related to the medical field. She served as a Republican Committeewoman in Long Branch in the 1970s and enjoyed working on election campaigns. She was active in a number of church groups over the years. Her true passion was for her family. She was a loving mother who would always provide encouragement and support for her children’s endeavors. As her immediate and extended family well know, she never let her love for them be in doubt and her love for her family was pure and unconditional. She leaves a memorable legacy in the many lives that she touched during her 96 years.

Her generosity was evidenced by the many causes and charities to which she gave often, including St. Andrews United Methodist Church of Spring Lake, the Wounded Warrior Project, the Southern Poverty Law Center, Paralyzed Veterans of America, Habitat for Humanity, Feeding America, the United Negro College Fund, Disabled American Veterans, the American Bible Society, Doctors Without Borders, Public Television (Channel 13), and the Fresh Air Fund.

She was preceded in death by her loving parents, Marvin F. and Charlotte Sloan King and her devoted God-daughter Susan Sloan.

In lieu of flowers, please consider a donation to any of the charities and causes to which she gave.

To leave a condolence, you can first sign into Facebook or fill out the below form with your name and email. [fbl_login_button redirect="https://wbhfh.com/obituary/charlotte-virginia-king-megill/?modal=light-candle" hide_if_logged="" size="medium" type="login_with" show_face="true"]
×