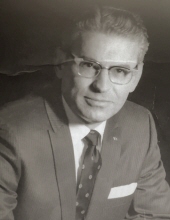 He was born on April 26, 1924, Red Bank, NJ, son of the late Nathan and Ida Cohen. He served in the Army during World War II. He was a Manager at Hercules Inc., where he was a Chemical Engineer and Quality Assurance Superintendent. He was a well-known expert in nitrocellulose. He was also dedicated to his community and to important causes. In Holmdel, he was a Township Committeeman and Mayor, where he started the Holmdel First Aid Squad, and was given awards from the Holmdel Police, First Aid, and Fire Company. He worked tirelessly to do what he could to make the world a better place. He was a Commissioner on the Bayshore Regional Sewage Authority, a member of the Water Supply Advisory Counsel, started the Monmouth County Human Relations Commission, was a member of Chhange (Holocaust center) at Brookdale Community College, a member of National Conference for Community and Justice, and successful campaign manager for Senators, County Clerk & Assemblywoman.

In addition to his parents, Mr. Cohen was preceded in death by his brother Jack Cohen and his sister Esther Morgovsky. He is survived by his loving wife, Mildred Zuckerman Cohen, whom he adored and was wed to for 71 years, his two daughters Jan Barnet and her husband Barry, Val Cohen and her husband David Lynn, and one granddaughter, Rebecca Faith Barnet.

To leave a condolence, you can first sign into Facebook or fill out the below form with your name and email. [fbl_login_button redirect="https://wbhfh.com/obituary/david-cohen/?modal=light-candle" hide_if_logged="" size="medium" type="login_with" show_face="true"]
×