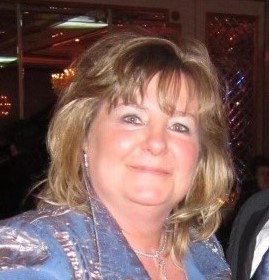 She was born in New Brunswick, NJ in 1958 to the late Juanita and James Milburn. She was raised in Old Bridge, NJ and graduated from Old Bridge High School. Debra went on to marry her high school sweetheart and beloved husband, Frank with whom she had two wonderful sons. The couple settled and raised their family in Marlboro.

She worked as a florist for over 40 years and was employed at Sayrewoods Florist for the last 15 years. She enjoyed fishing and clay target shooting whenever she had the chance. She was an avid gardener and had several bird feeders in her backyard. She enjoyed her time playing fantasy football and participating in various bowling leagues. As a passionate dog lover, Debbie considered her dogs Tayla and Trigger to be members of her family. She was a parishioner at St. Gabriel’s Roman Catholic Church where she was a member of Respect Life and the Altar Rosary Society, an Eucharistic Minister and church flower decorator. Debbie valued spending time with her family and especially her five grandchildren.

For messages of condolence, or to share a favorite memory of Debra, please visit her page of tribute at www.HolmdelFuneralHome.com.

To leave a condolence, you can first sign into Facebook or fill out the below form with your name and email. [fbl_login_button redirect="https://wbhfh.com/obituary/debra-ann-zadlock/?modal=light-candle" hide_if_logged="" size="medium" type="login_with" show_face="true"]
×