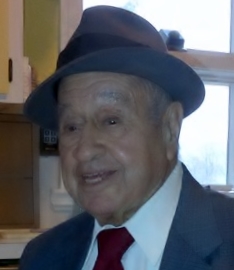 Dominic (Mickey) Tomaini, age 98, died peacefully at his home on August 18, 2015. Mr. Tomaini was a lifelong resident of Long Branch, NJ. In 1985, he concluded a long and very successful career as a liquor salesman for the Flagstaff Liquor Company. Prior to that he was a salesman for Coca-Cola and Hoffman Beverages. Mr. Tomaini was the son of Pietro and Delfina (Simonelli) Tomaini who both emigrated to the U.S. from their home country of Italy. Born on April 24, 1917, he was one of eight children, including five brothers and two sisters. Love of family was a central part of Mickey's life. A lifelong bachelor, Mickey lived with and cared for his mother until her death in 1980. He was a proud graduate of Long Branch High School (class of 1937). He was the third and youngest of three athletic brothers to star for Long Branch where he became one of the schoolâ€™s greatest all-round athletes in the middle 1930s. He won nine varsity letters, four in track, three in football, and two in basketball. He served as captain of the gridiron team, and also was selected on the First Team All State in 1936. He was a member of four successive state championship track teams and had the honor to be on the first Long Branch football team to beat Asbury Park High School in 22 years. After graduating from Long Branch he received an athletic scholarship to attend the Pennington Academy where he played guard on the football team. By virtue of his outstanding individual athletic accomplishments, he was elected into the Long Branch High School Athletic Hall of Fame. He was also a past President of the Long Branch Green Wave Association. Mickey was an avid sports fan and enjoyed hunting and fishing with his brothers and friends throughout the woodlands of New Jersey. He was the owner of several thoroughbred horses and enjoyed time in the winnerâ€™s circle at Monmouth Park and Gulfstream Park, FL. Since childhood, he had an interest in gardening and his many family members and friends had the good fortune to be frequent recipients of some of New Jerseyâ€™s finest summer vegetables. His many accomplishments aside, Mickey is best remembered for his love of family, friends, his good nature and very generous spirit. He was the host of numerous family gatherings on Sundays, holidays and special occasions, and his door was always open to friends and family members for lively conversation, a good drink, and if you were lucky, a home-cooked meal. Mickey was predeceased by his parents, Delfina and Pietro; his brother's and sisters John, Louise, Frank and his wife Mae Tomaini, Julius and his wife Margaret, Rose and her husband Bill Doane, Peter and his wife Cora Tomaini; his nephew Peter Tomaini; his nieces Cheryl and Karen Tomaini; and his long time companion Lucille Schifflin. Mickey is survived by his loving brother Hugo Tomaini of Staten Island, his devoted nieces and nephews James and his wife Becky Tomaini of Mill Hall, PA; Robert Tomaini of Creamridge, NJ; John Tomaini of West Long Branch, NJ; William and his wife Christine Doane of Bridgewater, NJ; Michael Doane of Novato, CA, Delfina Tomaini Russin and her husband Rob of Jacksonville, FL and Darlene Corrubia and her husband Guy of Brick, NJ, his dearest friend Guli Kemularia, and his many grand and great-grand nephews and nieces, and cousins both in the United States and Italy. His family will never forget the unconditional love he gave us all. Visitation Thursday Aug. 20th, 7-9 pm and Friday, Aug. 21st, 4 to 8 pm at the Woolley-Boglioli Funeral Home 10 Morrell Street, Long Branch. Funeral services will be Saturday, August 22nd, 9 am at the Funeral Home, followed by a mass of christian burial, 10 am at St. Michael's RC Church, Long Branch. Interment will follow on the Tomaini family plot at Woodbine Cemetery, Oceanport. To share a favorite memory of Mickey or place a message of condolence please visit his Book of Memories at www.woolleyboglioli.com.

To leave a condolence, you can first sign into Facebook or fill out the below form with your name and email. [fbl_login_button redirect="https://wbhfh.com/obituary/dominic-e-tomaini/?modal=light-candle" hide_if_logged="" size="medium" type="login_with" show_face="true"]
×