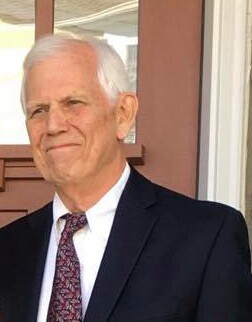 Don was born in Chicago, Illinois on March 18, 1941 to Henry and Helen (Anderson) Gatlin. He grew up in Park Ridge, Illinois and graduated from Maine Township High School in 1959. Shortly before he left to attend Miami University in Oxford, Ohio, he and his family moved to Ridgewood, NJ. While at college, he met another Ridgewood resident, Karen Boe, who would become his wife. He was a member of Sigma Nu Fraternity. He graduated in 1963 with a B.S. in business and a major in accounting.

He later did graduate work in taxation at Pace University in New York. He served in the National Guard’s 50th Armored Division, 104th Engineer Battalion. He began working for Sterling Drug, Inc. in 1964 as a tax accountant. He was named tax manager in 1975 and assistant treasurer in 1980.

Don and Karen married on April 18, 1964 at the Old Paramus Reformed Church in Ridgewood, NJ. After a honeymoon in Bermuda, they lived in Saddle Brook, NJ. They bought their first house in Oakland, NJ, and in 1973 they moved to Wyckoff, NJ, where their two children grew up. They moved to Holmdel, NJ in 2018.

To leave a condolence, you can first sign into Facebook or fill out the below form with your name and email. [fbl_login_button redirect="https://wbhfh.com/obituary/donald-edward-gatlin/?modal=light-candle" hide_if_logged="" size="medium" type="login_with" show_face="true"]
×