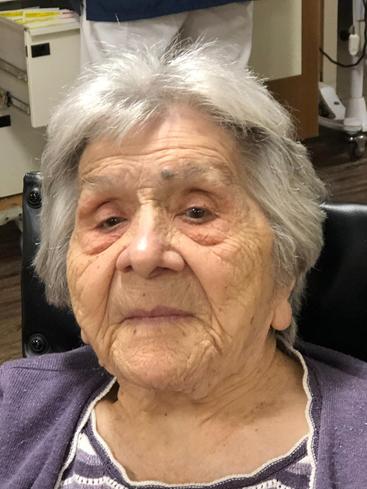 Ermelinda Verrico of Holmdel, New Jersey died on Sunday, August 22, 2021 at the age of 104. Known fondly as “Millie”, she was born in 1917 and raised in New York City to Carmela and Michael Morra.

Millie often spoke of growing up during the times of home gas lights, sharing clothes, beds and meals with her five sisters and two brothers.

After eighth grade, Millie held various positions in the garment district in New York City. She ultimately became a seamstress at M&T Sportswear and continued her stay for many years. Her talents of sewing and visionary of décor was shared with many members of her family. Curtains and all sorts of unique window treatments, upholstery, suits and dresses were just a few of her creations.  Millie approached each task as a challenge and enjoyed the joy it gave others.

She met John, the love of her life on an arranged date and later married on May 1, 1938.  Millie would chuckle when she would speak of how they drove to Pittsburgh to visit with relatives for their honeymoon. They began their life in an apartment in the Bronx and raised their three children, Frank, Michael and Johanna.  Millie remained there for 70 years.

She is predeceased by her husband John Verrico and her son Michael Verrico.

Surviving are her children Frank John and his wife Beverly Verrico of Holmdel, Johanna Randall of Wappinger Falls, New York, her four grandchildren John, Joseph, Michael, and Justin, and her three great-grandchildren Chris, Luke, and Jack.

To leave a condolence, you can first sign into Facebook or fill out the below form with your name and email. [fbl_login_button redirect="https://wbhfh.com/obituary/ermelinda-verrico/?modal=light-candle" hide_if_logged="" size="medium" type="login_with" show_face="true"]
×