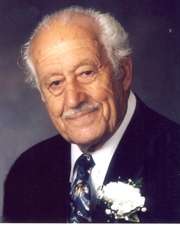 Frank Bongarzone, 91, of Tinton Falls, passed away peacefully with his family by his side, Wed. March 25th, at the St. Barnabas Hospice and Palliative Care Center at Monmouth Medical Center, Long Branch. Mr. Bongarzone was born in Long Branch lived there before moving to Tinton Falls in 1955. He was a graduate of Long Branch High School, and served his country honorably in the U.S. Army on the beaches of Normandy during World War II. In 1939 Mr. Bongarzone and his brother Joseph established Bongarzone Brother's Nursery, Long Branch., in 1950 they moved the nursery to Tinton Falls. For many years he was President of the Nursery. He was a communicant of St. Dorothea's RC Church, Eatontown. Mr. Bongarzone was the Vice President of the N.J. Association of Nurserymen, in 1971. He was Chairman of the Tinton Falls Shade Tree Commission. Mr. Bongarzone and his wife Claire, owned and operated Burbon Kennels, Tinton Falls, breed and showed dogs for many years. They owned an Alaskan Malamute, named Rover that won best of breed at Westminster Kennel Club, N.Y.C. He and his wife traveled extensively throughout their life time together. Surviving is his wife of 62 years, Claire Burke Bongarzone; two sons, Ronald Rocco Bongarzone, Tinton Falls, Frank Bongarzone, Jr., Wall Twp.; two daughters and a sons-in-law, Kathleen & Ralph Freda, Alabama, Lois & Phil Visicaro, Long Branch; two sisters, Marie Pizzulli, Allenhurst, and Frances Hornick, West Long Branch; 5 grandchildren, Marissa Brown, Rocky Bongarzone, Philip M. , Christina and Nicholas Visicaro. Visitation will be Friday, 2 to 4 and 7 to 9 PM at the Woolley Funeral Home, 10 Morrell St. at Broadway, Long Branch. The funeral mass will be celebrated Sat. 10:00 AM at St. Dorothea's RC Church, Broad Street, Eatontown. Interment will follow in Mt. Carmel Cemetery, West Long Branch. You may light a candle of remembrance for Mr. Bongarzone, on the opposite page

To leave a condolence, you can first sign into Facebook or fill out the below form with your name and email. [fbl_login_button redirect="https://wbhfh.com/obituary/frank-r-bongarzone/?modal=light-candle" hide_if_logged="" size="medium" type="login_with" show_face="true"]
×