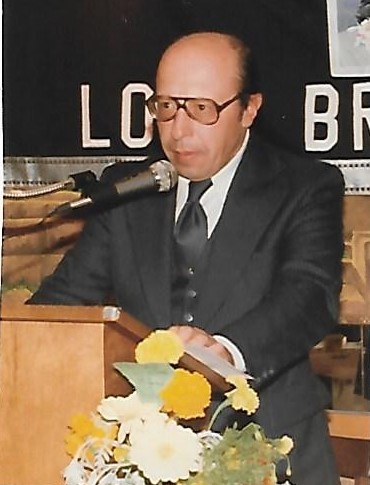 Henry R. (Skip) Cioffi of Long Branch, devoted husband, father, grandfather, former Mayor and a longtime pillar of the community, passed away peacefully at home on Monday, April 27, 2020, surrounded by his loving family.

Skip was born and raised in Long Branch, the son of the late Henry “Harry” Cioffi and Jean (Strollo) Cioffi.

At Red Bank Catholic High School, he played varsity football and starred in comic operettas and musical comedies. Skip served in the U.S. Marine Corps from 1949-1952. He went on to earn a B.S. in Economics from the Wharton School of Finance at the University of Pennsylvania, class of 1959.

Skip’s career in public service was focused on school board administration and finance. He first worked in Eatontown and later in Elizabeth, the second-largest school district in the State, managing a budget that increased from $22 million to $45 million during his leadership. He was innovative, creative, and sound in his assessments. During the Vietnam War, he was called to testify before Congress on federal Impact Aid for local school districts that had increased expenditures due to the enrollment of children from families at military bases. For the Elizabeth school district, he financed construction of a state-of-the-art high school. Post-retirement, he consulted and worked on Special Projects for both his former employers.

Prior to elected office, Skip was a member of the Long Branch Zoning and Planning boards. He was twice elected to City Council and served as Long Branch Mayor for 12 years. During his tenure as Mayor, taxes were reduced 8 times and upon his election, taxes were reduced for the first time in 14 years, despite runaway inflation. He made sure Long Branch had stellar recreational programs. To wit, Long Branch purchased land for Seven Presidents Park and established a land bank fund for future park development. Most of Ocean Boulevard’s construction funding was accomplished by him. He assured the electrification of the North Jersey Coastline and revitalized the pier and oceanfront. Early concern for our present ecological crisis compelled his initiation of New Jersey’s first successful recycling program. When he saw issues were dividing the community, he brought in star coaches and upgraded facilities and began sports training camps to develop the High School football program. For years, Long Branch led in State Championships and brought renewed collaboration and pride back to the community. He remained engaged in community activities throughout his life. One of his most satisfying experiences was as a member of the Board of Trustees of the Elizabeth General Hospital.

Skip was quite the golfer. The Jets were his team, and he took his children or his cousin Dennis Jackson out to old Shea Stadium, rain or shine. He loved watching a good fight and sat ringside with his son-in-law, John Storz. He enjoyed many lifelong friendships and especially loved his golf and political buddies. To the end, he appreciated all the people who volunteered to work on his campaigns.

Skip preferred Sinatra to Bennett. He took his daughter Gina to her first David Bowie concert, and all of the family to see the Village People at Madison Square Garden. Skip was dedicated to his Roman Catholic faith and his family. He delighted in his daughter Dani’s sense of humor, and he worried about his sons Michael and Henry on duty as firemen.

Skip especially loved his wife Jean (DeStefano) and found in her a beautiful friend and companion over their 59 years together. Back in the day, he loved dining with his wife on Saturday nights at the Surf and he danced the Lindy like no other person. He is survived by Jean of Long Branch; son Michael and daughter-in-law Sylvia of Ocean, daughter Gina Cioffi Loud and son-in-law Ted Loud of Atlantic Highlands, daughter Danielle and her husband John Storz (Skip’s friend and third son) of Eatontown, son Henry (Skippy) Cioffi, Jr., and daughter-in-law Valeria Cioffi of Oceanport, two grandsons, Henry and Luciano Cioffi, three granddaughters, Sofia, Marina and Mariella Cioffi, his brothers, Rev. Ronald Cioffi of Freehold and Dr. Robert Cioffi of Atlantic Highlands, and many cherished cousins.

A private service and burial will be held on Saturday, May 2. A mass and life celebration will be held when appropriate. The Woolley-Boglioli Funeral Home in Long Branch is handling arrangements.

In lieu of flowers, please send a contribution in his memory to NoLimitsCafé.org, the Wounded Warrior Project, the Stephen Siller Tunnel to Towers Foundation, or the Cooley’s Anemia Foundation, www.thalassemia.org.

To leave a condolence, you can first sign into Facebook or fill out the below form with your name and email. [fbl_login_button redirect="https://wbhfh.com/obituary/henry-r-skip-cioffi/?modal=light-candle" hide_if_logged="" size="medium" type="login_with" show_face="true"]
×