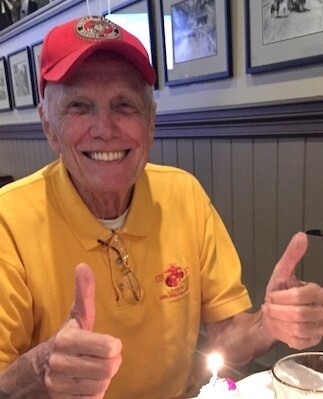 John (Jack) B. Lietz, 86 of Aberdeen, was called home to God, unexpectedly, early Tuesday morning on December 8, 2020, surrounded by the love and prayer of his family.

Quick with a joke and always prepared with words of encouragement, Jack greeted everyone with a smile and a prayer in his heart. He always took time to write thoughtful letters to friends and family, no matter the occasion. His words were like angels that either tickled you or taught you. A genuinely caring and loving friend, Jack touched many souls and will live on forever in all our hearts.

Born in Greenpoint, Brooklyn, on July 7, Jack was raised in Jackson Heights, NY, along with his sister, Jane. He attended Newton High School and graduated from St. John’s University. Following college, he enlisted in the United States Marine Corp., and served his country proudly. In 1960, he began his career as a computer system engineer at Western Electric, then AT&T, Lucent Technology, and Alctel-Lucent, for 35 years before he retired. It was at Western Electric where he met the love of his life, Helen, and swept her off her feet with his humor and charm, and two tickets to the theater. Two years later they married, and in 1966 they moved to Hazlet, NJ to raise their family, then moved around the corner in 1979 to Aberdeen where they settled.

Raising a family and enjoying a cold one with friends put that smile on Jack’s face. He cherished his family vacations to Ocean City, Maryland, cruises with friends, morning coffee with the “nine o’clockers,” golf getaways, white water rafting, watching the Mets and the Giants, regardless if they lost, and he was always present for his children’s and grandchildren’s events, despite the weather or distance. His energy was boundless. For 30 years, he bowled in the Monday night Airport Plaza league in Hazlet, then 20 years in Strathmore on Tuesdays, up until this year. He was also an avid golfer and bridge player, and enjoyed cribbage, pinochle, board games, and playing his piano — his favorite song, of course, the Marine Corps Hymn.

Jack was a devout Catholic and a driving force at St. Benedict’s Church in Holmdel, NJ for over fifty years. He was a truly giving man who personified the idea of community, not just by word but by deed. His many acts of kindness included the St. Vincent de Paul Food Pantry, Kenosis Prison Ministry, Extraordinary Minister of Holy Communion at Sunday Mass and Bayshore Hospital, Christ Life Prayer Group, Manna House, and the Knights of Columbus in Holmdel (3rd Degree), and in Keyport (4th Degree), facilitating pancake breakfasts, parish carnivals, bingos, and countless fundraisers. He was a faithful servant and truly believed, “In service to One, in service to All.” May his spirit continue to inspire.

Jack is survived by his wife Helen Lietz of Aberdeen; his children John Lietz and his wife Mary Ann of Aberdeen, Christine Lietz and her partner Joe Morton of Red Bank, and Jennifer Forsyth and her husband John of Brick; his sister Jane Rubé of Buffalo, NY; and his beloved grandchildren Brianna, Erin, Jackson, Jade and Alyssa.

Visitation will be on Monday December 14th from 3:30 to 7:30 pm at the Holmdel Funeral Home, 26 South Holmdel Road, Holmdel.  A Mass of Christian Burial will be offered on Tuesday December 15th at 11:00 am at St. Benedict’s RC Church, 165 Bethany Road, Holmdel.  Interment will be on Wednesday at Brigadier General William C. Doyle Veterans Memorial Cemetery, Arneytown, NJ.  Out of respect for John’s family and friends, please be brief in visitation to allow all an opportunity to pay their respects. Masks are required.

In his honor, please put $5 in an envelope and donate to St. Benedict’s St. Vincent de Paul Food Pantry, or Knights of Columbus’ Send a Hero Home Fund, or Kenosis (Prison Ministry) Society of Diocese of Trenton.

To leave a condolence, you can first sign into Facebook or fill out the below form with your name and email. [fbl_login_button redirect="https://wbhfh.com/obituary/john-jack-b-lietz/?modal=light-candle" hide_if_logged="" size="medium" type="login_with" show_face="true"]
×