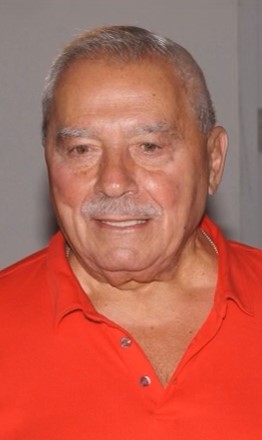 John Squeo, 84 of Boca Raton Florida, formerly of Oakhurst died at his home on Mon. Oct. 10th, surrounded by his loving wife and daughters.

He was a well known and respected restaurateur in the shore area. He brought the first liquor license to Allenhurst Beach Club Restaurant and built the bar with his own hands. The restaurant was a huge success. He later went on to own and operate Jimmy’s Italian Restaurant, in Asbury Park. Following Jimmy’s, he opened Café Continental in West Long Branch. He later acquired the Tally Ho in Tinton Falls and operated that until his retirement. His love for the restaurant business and his extended family took him out of retirement. He designed the kitchen and helped relaunch Donovan’s Reef after Sandy. He cooked and managed the kitchen at Donovan’s Reef for two years.

John loved to entertain and cook, from a 36 lb. turkey at Thanksgiving to the best Seven Fishes for Christmas Eve as well as cook a full meal for his daughters and their friends when they would come home at night. John’s most noted dishes were his linguini and white clams, shrimp scampi and pasta e fagioli. His fettuccini Alfredo was often replicated by people who would call him and ask him how to prepare it. He enjoyed his lunch crew at Mr. C’s and Antonio’s as well as getting together with his friends once a month from St. Peter’s Prep.

He was an avid player of the New Jersey and Florida Lotteries. He enjoyed doing crossword puzzles every day and some days he would do more than one. He was a fan of the New York Giants and loved football. He enjoyed Monmouth Park Racetrack. John loved the Godfather movie and was a fan of Pavarotti, as well as Sinatra, especially the song, My Way. John loved to play My Funny Valentine for Grace, his beloved wife.

Two of John’s signature characteristics were his love of food and his generosity. He cherished time at the dinner table and would often describe in glorious detail what he ate that day. He was well-known for grabbing the check and refused to allow anyone else to pay. Whether he owned the restaurant or not, John loved to buy anyone and everyone a drink.

John was born and raised in Jersey City. He graduated from St. Peter’s Prep where he was a star football player. After high school, John went on to play football at Boston College where a knee injury ended his football career.

He was pre-deceased by his parents, Lauretta and John Squeo, and his sister Lauretta O’Connor.

To share a favorite memory or send a message of condolence please visit John’s page of tributes at www.woolleyboglioli.com.

To leave a condolence, you can first sign into Facebook or fill out the below form with your name and email. [fbl_login_button redirect="https://wbhfh.com/obituary/john-squeo/?modal=light-candle" hide_if_logged="" size="medium" type="login_with" show_face="true"]
×