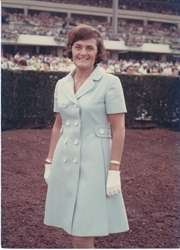 Lois F. Wardell, 90 of Monmouth Beach passed away peacefully surrounded by her family at her home on Saturday April 30, 2011. Lois lived in Monmouth Beach since 1986. Prior to that she lived in Oceanport, West Long Branch and Long Branch where she was born and raised. She was a former member of Deal Golf and Country Club, where she was a member of the Deal Dolls Bowling Team. She enjoyed golfing, shopping, her dogs, and spending time with her family and friends. For many years while her Husband Harvey I. Wardell was President of Monmouth Park Racetrack, Lois enjoyed entertaining her many friends for lunch and a day at the races. Lois was pre-deceased by her husband, Harvey I. Wardell, in 2006; her sisters, Eunice Sarcomo and Janet Palaia. Surviving is a son and daughter-in-law, Harvey and Rosemary Wardell, Ocean Twp.; a daughter, Patti Wardell, Eatontown; nephew, Frank Palaia, Jr.; three nieces, Janet Rickey, Donna Guirlando and Karen Ward; her two dogs, Missy and Cosmo; her loving caretaker, Edy. Visitation will be Wed. May 4th, 10 AM until the time of the service at 11 AM at the Woolley Funeral Home, 10 Morrell St., Long Branch. Entombment services will follow at Woodbine Mausoleum, Oceanport. Contributions in Lois's memory may be made to St. Barnabas Hospice, 300 Second Ave., Long Branch, NJ 07740. You may light a candle of condolence by visiting www.woolleyfh.com.

To leave a condolence, you can first sign into Facebook or fill out the below form with your name and email. [fbl_login_button redirect="https://wbhfh.com/obituary/lois-f-wardell/?modal=light-candle" hide_if_logged="" size="medium" type="login_with" show_face="true"]
×