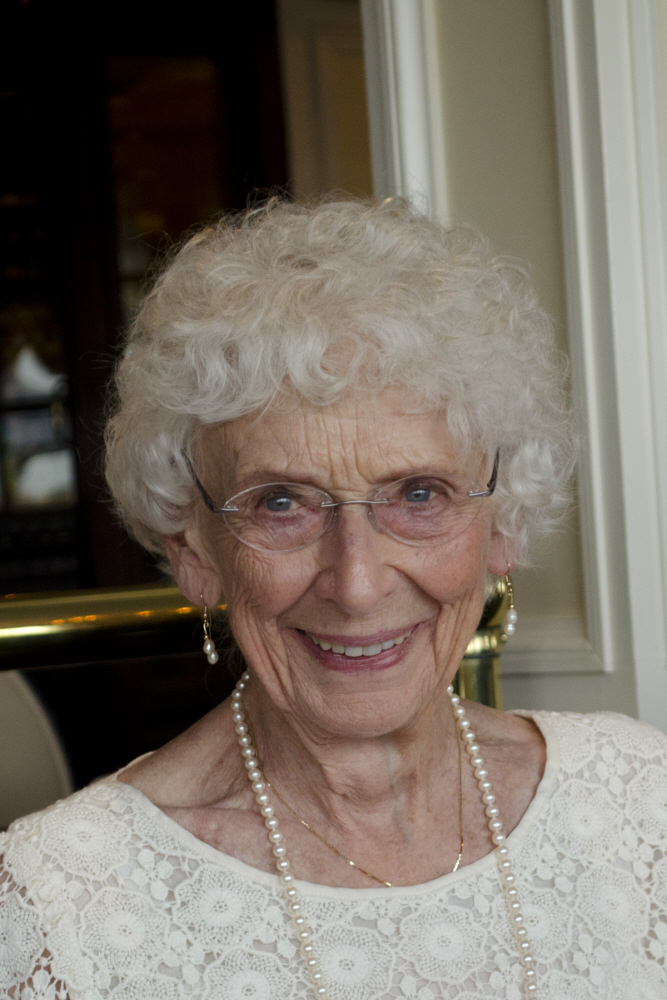 Lois Elyse (Meyer) Wier passed away on October 28, 2015 after a brief illness at the age of 90. She was born in Britt, Iowa, the youngest of three children, and graduated from the high school there, spending the following summer training to be a teacher. She taught in a one room schoolhouse for a year to earn money for college, then went to Iowa State University, where she met and married Joseph Wier, a union that lasted over sixty-five years. After earning their degrees, they moved to Illinois, where Joe did his doctoral studies while Lois worked and began raising their two daughters. After he received his PhD, they moved to New Jersey, first to Scotch Plains and then to Colts Neck, where she lived for more than fifty years. Lois was active in many groups over the years, most concerned with her twin passions for women's education and music. She belonged to the American Association of University Women and was a member of PEO since 1972, serving as New Jersey state president from 1985-1986. She and Joe were long-time subscribers and contributors to the New Jersey Symphony Orchestra. She was an avid bridge player and reader, belonging to several bridge groups and book clubs. She loved to travel and for years spent annual vacations in Florida and Nantucket, as well as making jaunts to Europe, Alaska and Tahiti and many trips across the country to visit the widely scattered members of her family. She was a long-time member of the Colts Neck Reformed Church and performed with their Morning Bells bell choir for several years. Of Lois' many talents, perhaps her greatest gifts were those of friendship and family. She had friends of all ages and cherished them all. Her grandchildren knew her as 'Ra' and she was very involved in their lives, attending swim meets, soccer matches and choral performances, graduations and weddings. She loved to include them in her travel plans, preferring to share her anniversaries with cranky toddlers and active teenagers rather than on quiet sightseeing. Her holiday celebrations and the delicious food she served are a legend in the family and will be greatly missed. Lois leaves two daughters, Susan Mills and her husband Stephen of Falmouth, MA and Mary Silver and her husband Harold of Bridgewater, NJ; four grandchildren, Matt Silver and his wife Kelly of Morristown, NJ, Andrew Silver and his wife Cara of Pittsburgh, PA, Greg Mills of Charlotte, NC and Elysa Mills of Falmouth, MA. She is also survived by numerous nieces and nephews and many dear friends. Her husband Joseph and her brother, Henry Meyer, and sister, Ruth Lerdal, predeceased her. A funeral service will be held at the Colts Neck Reformed Church, 72 County Road 537 West, Colts Neck, New Jersey, 07722 on Saturday, 31 October at 11:00 am, with visiting hours from 10 to 11. In lieu of flowers, the family requests that donations be made in her memory to the Colts Neck Reformed Church, P.O. Box 57, Colts Neck, New Jersey, 07722 or to Cottey College, 1000 W. Austin, Nevada, MO 64772.

To leave a condolence, you can first sign into Facebook or fill out the below form with your name and email. [fbl_login_button redirect="https://wbhfh.com/obituary/lois-m-wier/?modal=light-candle" hide_if_logged="" size="medium" type="login_with" show_face="true"]
×