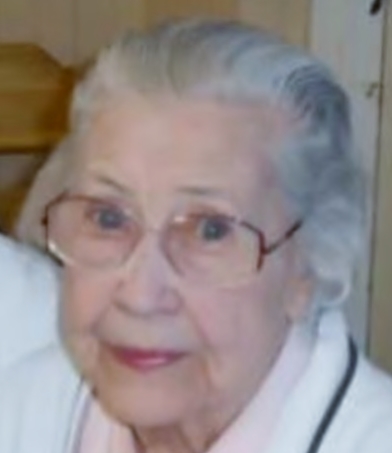 Lucille K. Bry (nee Harvey), 93 of Elberon, passed away peacefully at home on Friday, July 3rd, just two days before her 94th birthday. Born and raised in Waterloo, Iowa, she graduated Sacred Heart High School and attended business school in Minneapolis. Upon the out break of World War II, Lucille enlisted in the WACS ( Women's Army Corps), attaining the rank of Sergeant and remained in service until the end of the war. Having met her to be future husband M. Edwin Bry, Jr. at Fort Monmouth, Eatontown, NJ, they were married March 6, 1945 and lived most happily together until his passing in 2006. Being an experienced bookkeeper, she helped establish the family owned and operated Bry's Government Surplus and General Merchandise business in Neptune, in 1946, which later evolved in the now Bry's Marine. Lucille enjoyed gardening and was an avid reader of mystery novels and British history. She along with her husband Ed, traveled extensively to such places as Europe, Russia, China, Australia and New Zealand. They always looked forward to their winter's together at their home in Florida. Lucille had a great love and pride for her family and enjoyed their many years of happiness together. She is survived by her two sisters, Florence Johnson, Iowa and Betty McLancon, Colorado; two sons William and his wife Barbara, Long Branch and James and his wife Patricia, West Long Branch; four grandchildren James Bry and his wife Ixora Salazar, Tamara and her husband Jeffrey Wolff, William Bry and David Bry; three great grandchildren, Daniel, Brandon and Sarah; and one great great granddaughter, Nova; and ten nieces and nephews and their family's. Visitation Thursday, July 9th, 4 to 8 pm at the Woolley-Boglioli Funeral Home, 10 Morrell Street, Long Branch. The funeral and entombment services will be private. Contribution's in memory of Mrs. Bry may be made to the Deborah Heart and Lung Hospital, 200 Trenton Road, Browns Mills, NJ 08015. To share a favorite memory or send a message of condolence please visit Mrs. Bry's Book of Memories at www.woolleyboglioli.com.

Service:
The funeral services and entombment will be private

To leave a condolence, you can first sign into Facebook or fill out the below form with your name and email. [fbl_login_button redirect="https://wbhfh.com/obituary/lucille-k-bry/?modal=light-candle" hide_if_logged="" size="medium" type="login_with" show_face="true"]
×