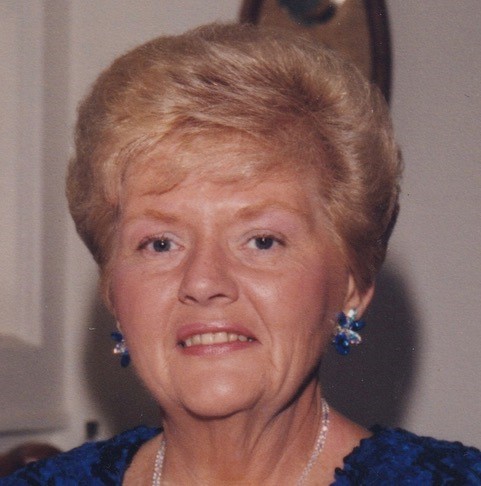 DUE TO A FAMILY MEMBER TESTING POSITIVE FOR COVID-19 THE VISITING AND FUNERAL SERVICE HAS BEEN POSTPONED TILL MONDAY, MAY 16th FROM 3:00-7:00 PM.

She was born in Newark, NJ on August 31, 1934, to the late Thomas and Ruth (Moss) Donohue. Peggy married William C. Reu on October 2, 1954 and moved to the Jersey Shore. Peggy was a communicant of St. Michaels Church in West End. She was also a member of the Oakhurst Fire Co. Ladies Auxiliary and an office manager at Eyes First Vision Center in Sea Girt.  After suffering a stroke in 2003, Peggy did not let her disabilities get the best of her, and she lived her life to the fullest possible extent. She was a strong determined woman who did things on her own terms.

She was predeceased by her devoted husband William C. Reu and her brother Mark Donohue. Surviving are her daughter Patricia A. Reu and son and wife Thomas C. And Catherine E. Reu; her grandchildren: Scott and wife Fallon, Shawn and wife Morgan, Stephen and fiancée Sydney Samuel and Spencer; 1 great grandchild, Quinn, and well as her beloved grandpup Mac.

Visitation will be Monday, May 16th, from 3 pm until the time of the service at 6:30 pm at the Woolley-Boglioli Funeral Home, 10 Morrell St, Long Branch. Interment will be private.

To leave a condolence, you can first sign into Facebook or fill out the below form with your name and email. [fbl_login_button redirect="https://wbhfh.com/obituary/margaret-peggy-a-reu/?modal=light-candle" hide_if_logged="" size="medium" type="login_with" show_face="true"]
×