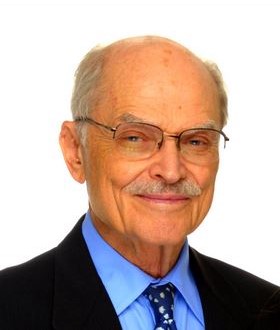 Paul S. Kramer of Manhattan passed away April 1st, 2021. He was surrounded by his family. He was loved by all and brought his warmth and good humor to everyone who was lucky enough to spend time with him. He was a true Partner, colleague and mentor. Paul taught so many the finer things in life, and his 67 year wonderful marriage to Marilyn was a role model for many. He worked tirelessly to help everyone who needed advice with their personal or professional challenges. Paul was a philanthropist, giving generously to the arts, education, and Jewish charities.

Paul was born and raised in Cambridge, MA. He attended the Cambridge Rindge and Latin School. He received his B.S. in 1953 and his M.B.A. a year later from Boston University. He began his career at the New York office of Arthur Young (now Ernst & Young, “EY”) in August of 1954 and, except for two years in the Army in Okinawa, Japan and, subsequently, after returning to work at EY, Paul remained in the Army reserves until 1962. Paul served on many major clients including Capital Cities/ABC, Chiquita Brands, Club Med, Harper Collins, Kinney National Services, McGraw-Hill, NBC and Univision. He also handled Pechiney, a major French aluminum conglomerate, and was the Firm’s Liaison Partner with the French firm-responsible for services to French companies investing and operating in the United States. Paul was a great leader who led by example and was a willing mentor and confidant to many future Partners and CFOs, influencing how they handled themselves both inside and outside the Firm. Paul retired as one of the Firm’s most senior partners in 1992.

Paul served as a board member and investor in SFX Broadcasting and SFX Entertainment, the world’s largest producer, promoter and presenter of live entertainment. Paul Kramer was also on the board of CKX, Inc. that owned the rights to Graceland, the Elvis Presley Estate, the assets of American Idol, Muhammad Ali Enterprises and entertainment talent agencies. Since 2004, Paul also served as a board member of Tridan Corporation.

Paul also served on the Board of Directors of The Kips Bay Towers Condominium.

Paul was an avid golfer and longtime member of Navesink Country Club. Paul held season tickets to the New York Giants for over 50 years. Paul was also a lifelong lover of the Boston Bruins and, much to the consternation of most New Yorkers; he wore his Bruins hat around NYC with great pride. Paul was also known for his life-long love of travel, food and wine.

Paul is survived by the love of his life, Marilyn Moskowitz Kramer originally from Red Bank, NJ and his daughters, Susan Kramer of Hackensack, NJ and Hilary Joy Kramer of Holmdel, NJ and NYC and his loving grandchildren Shia and Timothy. Paul is predeceased by his beloved daughter, Amy and his sister, Shirley London. Paul is survived by his two sisters, Joan Sullivan and Andrea Phaneuf and many beloved nieces and nephews. A graveside service took place Monday, April 5th at B’nai Israel Cemetery, 492 Riverdale Ave. West, Tinton Falls, NJ.

To leave a message of condolence or to share a favorite memory please visit Paul’s page at www.holmdelfuneralhome.com.

To leave a condolence, you can first sign into Facebook or fill out the below form with your name and email. [fbl_login_button redirect="https://wbhfh.com/obituary/paul-s-kramer/?modal=light-candle" hide_if_logged="" size="medium" type="login_with" show_face="true"]
×