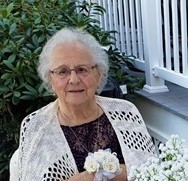 Rachel was born in Matawan and raised by her parents Anthony and Josephine Della Pietro in Hazlet with her five brothers and two sisters.  In her twenties, she met the love of her life, Gabriel.  They were married in 1955.  The couple eventually moved to Holmdel to raise their young family.

Rachel was a seamstress beginning her trade after high school and working until she had a family, transiting into a stay-at-home mother. Rachel loved to cook and take care of her family, always there when anyone needed her, she enjoyed traveling, going to New York City for plays on Broadway and tending to her garden. She was also the 2nd Vice President of the Holmdel Half Century Club for the past few years. She enjoyed attending senior meetings, activities, and socializing with her dear friends.

Rachel is predeceased by her loving husband Gabriel in 1996; her brothers Sammy, Carmin, Charlie and Anthony Della Pietro; and her sister Anne Pardue.

Rachel is survived by her brother and sister, Frank Della Pietro and Philomena Bottileri, her children Rose Drucker and her husband Robert, Linda Stewart and her husband Jere, and Frank Allocco and his wife Stacy; and her beloved grandchildren Kate Stewart, Amanda Budge and her husband Tim, Kristin Allocco and her Fiancée Dan, Gabriel Allocco, Alyssa Allocco, Christopher Stewart, and Jacqueline Drucker.

At the request of the family all services will be private.  A memorial service will be held in the spring to honor Rachel for family and friends not attending.

To leave a condolence, you can first sign into Facebook or fill out the below form with your name and email. [fbl_login_button redirect="https://wbhfh.com/obituary/rachel-ann-allocco/?modal=light-candle" hide_if_logged="" size="medium" type="login_with" show_face="true"]
×