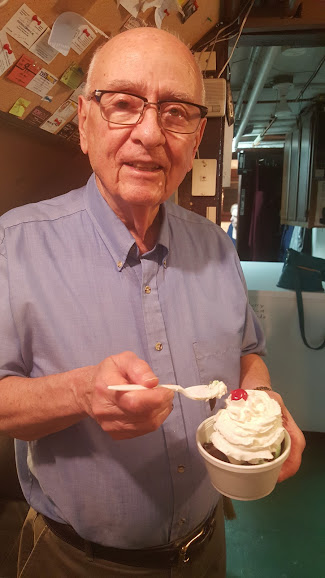 Ralph was born and raised in Brooklyn before moving to Maspeth, Queens. His father died unexpectedly during Ralph’s senior year at Brooklyn Technical High School. Soon after completing high school Ralph began work at the H. J. Heinz Co. to provide for his mother and 3 siblings.

Ralph worked a variety of jobs, ending up at AT&T, while also attending classes at Manhattan College.  He graduated from Manhattan College with an Electrical Engineering degree and soon after transferred to the Bell Laboratories location in Holmdel, NJ where he worked on the development of the touch tone telephone. He was named on several patents and is responsible for the tones you hear when you press the buttons on your home phone.

Ralph married his wife, Fran, in 1956, settled in Colts Neck, and continued raising their family of six children. He was a kindhearted man who always put others before himself. He was a devout Catholic, often spending time reading from the Bible. His faith guided him each day, and he never let an opportunity pass by to encourage others in their own faith. In later years he enjoyed spending time at the beach with his family, and traveling to Italy to visit the many relatives he had across the country, including the town his father was born (Santo Spirito) and his mother (Acquaviva Delle Fonte).

Ralph had a passion for roller skating, which he took up again when he retired. He joined adult skaters at the Jackson Skating Rink and it’s there he made many long-time friends. They would skate, have coffee, and have lunch, all the while discussing topics from religion, to politics, to what they all were going to bring to the next holiday celebration at the rink. He loved his skating friends dearly and appreciated their friendship. He continued skating until he was 87 years old.

Ralph spent his final years at beautiful Sunnyside Manor in Wall Township. It was there where he met so many new friends and was treated like family by the caring, compassionate staff. Many staff would say, “He’s just like my own grandpa”! They loved him and treated him with respect.

Helping unwed mothers provide for their babies was a charity very near to Ralph’s heart. He wanted those babies to have the best start in life possible. Therefore in lieu of flowers, please consider donating to one of Ralph’s favorite charities: https://www.severalsources.org/mission-and-history/

Visitation will be Thursday, November 18th from 2-4 and 7-9 PM at the Holmdel Funeral Home, 26 S. Holmdel Road, Holmdel. A mass of Christian Burial will be offered Friday, November 19th at 10:15 AM at St. Leo the Great R.C Church, 50 Hurleys Lane, Lincroft. An entombment will follow at St. Gabriel’s Mausoleum.

To leave a message of condolence or to share a favorite memory, please visit Ralph’s page at www.holmdelfuneralhome.com.

To leave a condolence, you can first sign into Facebook or fill out the below form with your name and email. [fbl_login_button redirect="https://wbhfh.com/obituary/ralph-nicholas-battista/?modal=light-candle" hide_if_logged="" size="medium" type="login_with" show_face="true"]
×