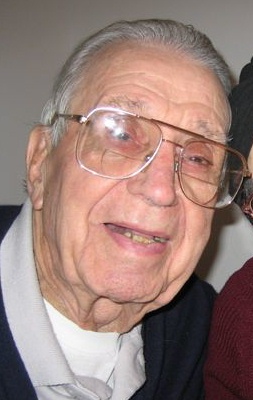 Richard V. Mancini, age 91, a United States Marine Corp. Veteran of World War II, passed away peacefully on October 20, 2012 with members of his family at his side. A former resident of Elizabeth, Carteret, Lavallette, Marathon, FL, Red Bank and Rumson, he spent his last years living and traveling with his children. Born on July 25, 1921 in Elizabeth, NJ, Mr. Mancini graduated from Thomas Jefferson High School in Elizabeth before serving 4.5 years with the US Marines in the South Pacific where he was involved in several major invasions and battles. After his decorated service for his country, Richard returned and married Katherine (Kitty) Mancini and started his family. During that time he worked and went to Pace College in New York, earning a degree in accounting, eventually becoming a Certified Public Accountant. He was preceded in death by his parents, Josephine and Michael Mancini, his first wife 'Kitty,' nee Soska, brothers John, James, and Anthony, as well as sisters Elizabeth, Mildred, and Helen, . He is survived by his remaining sisters, Rose (who will be celebrating her 100th birthday this December), Yolanda, and Delia. He was also preceded in death by his second wife, Phyllis, nee Killelea of Red Bank. Mr. Mancini also is survived by his loving children, Richard and his wife Jane of Winter Springs, FL, Kathy and her husband, Alfonse Modugno of Oceanport, NJ, Dr. Karen Mancini of Rumson, and Dr. Ronald Mancini and his wife Cynthia of Kensington, MD, as well as grandchildren, Richard III of Long Branch, Jonathan Blank of Rumson, Jordan Blank of Marlboro, Allison and Emily of Kensington, MD, plus numerous loving nieces and nephews. Mr. Mancini was an accomplished musician who performed before President Franklin Roosevelt. He loved deep sea fishing, playing Santa Claus at Christmas for his large family, playing cards, and traveling, especially on a trip to Italy in 1997. Visitation will be held at Holmdel Funeral Home on 26 South Holmdel Rd in Holmdel 732-946-3322, on Friday, October 26th 2-4 and 7-9. A Mass of Christian Burial will be offered at St Catharine's Church in Holmdel, 108 Middletown Rd in Holmdel on Saturday, October 27 at 9:15. In lieu of flowers, donations can be made to NJ Blind Citizens Assoc, 18 Burlington Ave, Leonardo, NJ 07737.

To leave a condolence, you can first sign into Facebook or fill out the below form with your name and email. [fbl_login_button redirect="https://wbhfh.com/obituary/richard-v-mancini/?modal=light-candle" hide_if_logged="" size="medium" type="login_with" show_face="true"]
×