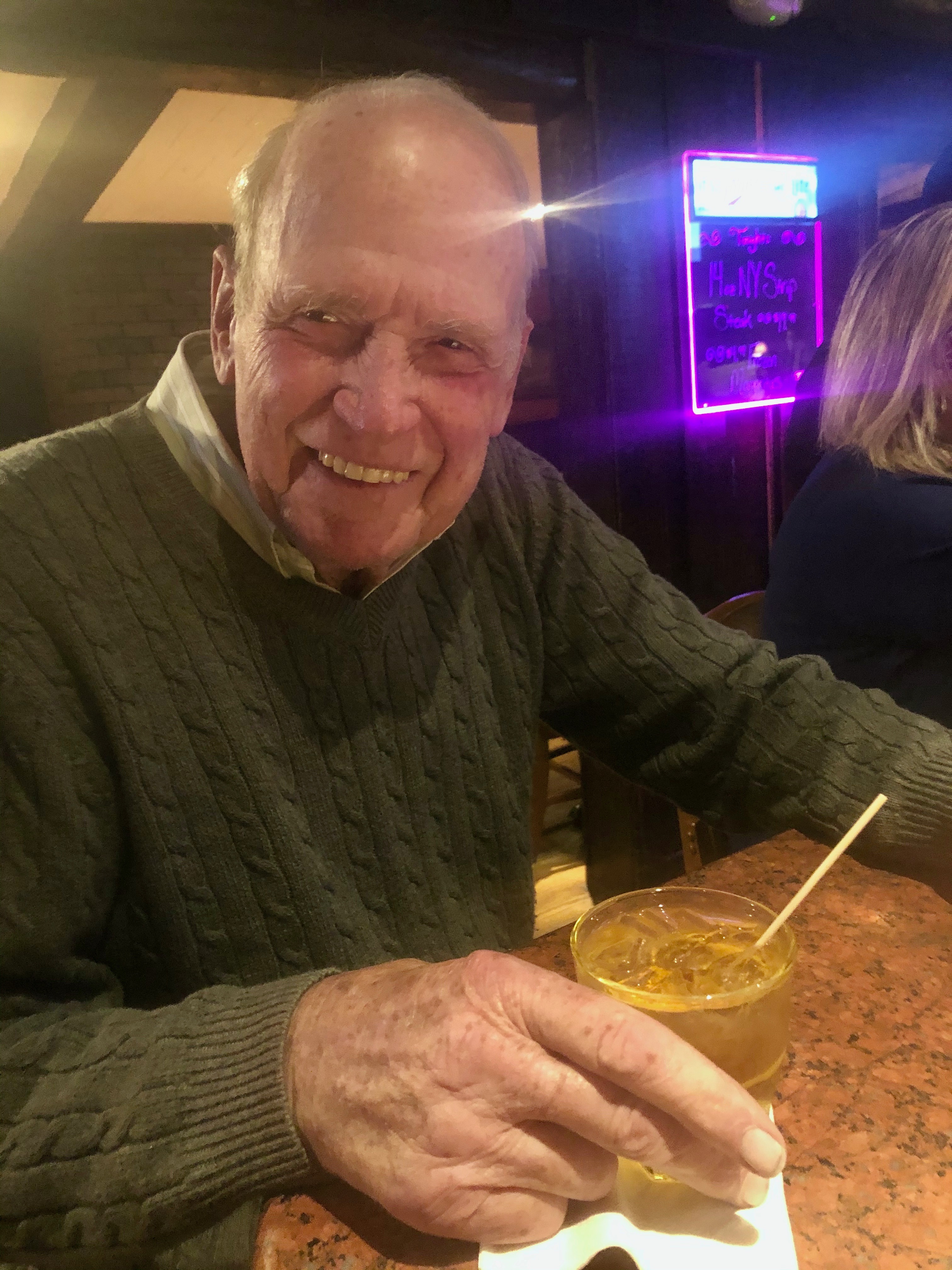 Our Dad often said his biggest joy and pride was his big, crazy family and he always ended a conversation with “I love you” and a big hug. Our Dad was a lovable, brilliant rascal until the day he died and will be sorely missed. He was our rock and always will be.

As a child, Bob worked the family farm in New Market, NJ while his father fought in WWII. He worked hard and had much responsibility but loved working and taught us to never do a “half-assed” job. This love of land led him ultimately to become a Master Gardener after he retired from dentistry and inspired him to beautify his own three-acre property throughout his life. Dad was always out in the yard, planting bulbs, tending to the shrubs and trees, and splitting his own firewood which made his hands seem like bear paws which we loved to hold.

Dad never took school seriously in his youth and didn’t consider college, as his parents never even attended high school. In fact, he thought he would join the army during the Korean War. A loving Uncle recognized Bob’s intelligence and encouraged him to take his college entrance exam. Soon after, Bob was accepted to Rutgers University where he studied agriculture. By his junior year he realized his innate love of learning, and even flourished in organic chemistry. He chose pre-med classes as electives, enjoyed working in the lab, was good with a microscope, and excelled in his classwork. For the second time, our Dad thought “Maybe I’m not such a dummy!” and continued taking pre-med classes while playing the saxophone in the marching band.

Bob turned down a scholarship at Michigan State to study Biochemistry and instead chose to attend dental school at Loyola University New Orleans. In addition to his studies, Bob worked at the Veterans Hospital and excelled as “Entertainment Coordinator.” Our Dad blended with the New Orleans locals and had many colorful stories from Mardi Gras – such as trying to climb up the mayor’s balcony on a dare and being arrested for disorderly conduct. Dad celebrated Mardi Gras unreservedly and often his early-morning professors would suggest he should go home and sleep it off.

After graduating from Loyola Dental School, Dad joined the Air Force, became a Captain and worked as the dentist at Ben Guerir Air Force Base outside Marrakesh, Morocco. There the stars aligned, and he met the beautiful love of his life, JoAnn McDonald, from El Paso, Texas. JoAnn was teaching first grade on the Base. Our Dad fell in love with our Mom at first sight. While the Base pilots all wanted to date our Mom, Dad won her over with his intelligence, personality, adventurous spirit, and 1961 MGA roadster.

Despite being warned not to leave Base, Bob and JoAnn often zipped off in the roadster (garaged in Holmdel today) to the many villages, Kasbahs and camel markets and were warmly welcomed by the locals. Dad recalled one date to Zagora fondly. They raced the little MGA to Zagora and became lost in the dark on the return trip to the Base. They pulled over for the night on a narrow dirt road and awoke the next morning on the edge of a canyon to a line of people, donkeys, and camels all curiously staring at them as they made their way to the market. After a nine-month courtship in Morocco, our Mom was slated to teach in Germany, but our Dad said “Baby, I’ve made up my mind. We’re getting married. Send that trunk back to Texas.” Back in the states, their love and adventures would continue.

Our Dad established a dental practice in South River, NJ while our Mom began to raise their four young daughters. The family moved to Holmdel, NJ in 1968. Rather than refer to family by their given names, Dad called our Mom “Wassey” and his daughters “Doozer,” “Dinky Doo Doo,” “Goose,” and “BHead.” He also gave silly nicknames to our friends and his grandchildren such as “World-Beater,” “Birdy-Butt,” and “The-Bean.”

Living with Dad was always an adventure. When Dad came home from work when we were young, we hid and tried to scare him as he came through the door. He happily played along each time by crying out and clutching his chest in fear. At dinner time, if one of us misbehaved Dad summoned the “spirits” and the table would suddenly begin to shake. Our behavior always improved as we never realized it was Dad’s knees that were the “spirits.” Our Dad also had us perform rain dances when he knew rain was due. In our minds, it was the power of our frantic rain dances that brought on the storms we loved to watch from our screened-in porch. When we scraped our knees, Dad healed us with his “Zoolie-Zoolie” words and “Make the hurt go away!!” (It worked!). Dad taught us to work hard at our chores. Other times he told us to stop studying so hard and enjoy life. He loved his cars and driving like “Rockford” from the TV show. On one occasion, Karen asked Dad to drop her off at the front door of the High School. Dad granted Karen’s wish literally and jumped the curb delivering her a foot from the High School front door.

Dad was a serious enthusiast and collector of classic and antique cars. He knew the make, model, and year of nearly every car on the road. Dad and his Cousin Jimmy went to hundreds of car shows together. Dad’s favorite car (after the 1961 MGA, naturally) was his prized 1959 DeSoto Adventurer, which won at both the Greenwich Concours d’Elegance and the Monmouth County Concours d’Elegance.

Dad enjoyed taking his 13 grandchildren out for spins in his 1949 Town and Country woodie convertible, 1961 MGA, 1958 Corvette, and 1971 Riviera (also known as the Bat Mobile). He was also very patriotic and attended every Memorial and Veterans Day ceremony representing the Air Force at the changing of the flag. Dad taught his grandchildren how to raise, lower, and revere the American flag. Upon the passing of their beloved Pappy, all 13 grandchildren toasted their King.

Though Dad enjoyed his mischievous side, he was also very kind and generous and it was always his treat to provide dental care to the priests in South River, NJ. Our Dad was a greeter at the 8:00 am Mass at the Church of St. Catherines in Holmdel, NJ. Each person he welcomed to Mass was special to our Dad. As a member of St. Andrews at St. Catherines Church, his faith grew, and his many friendships deepened.

Our Dad lived by the motto: Live well, Laugh often, Love much. But his favorite words came from the Irish blessing he gave with emotion before each Thanksgiving feast:

May the road rise up to meet you.

May the wind be always at your back.

May the sun shine warm upon your face,

The rains fall soft upon your fields.

And until we meet again,

May God hold you in the palm of His hand.

To leave a condolence, you can first sign into Facebook or fill out the below form with your name and email. [fbl_login_button redirect="https://wbhfh.com/obituary/robert-carl-lacosta/?modal=light-candle" hide_if_logged="" size="medium" type="login_with" show_face="true"]
×