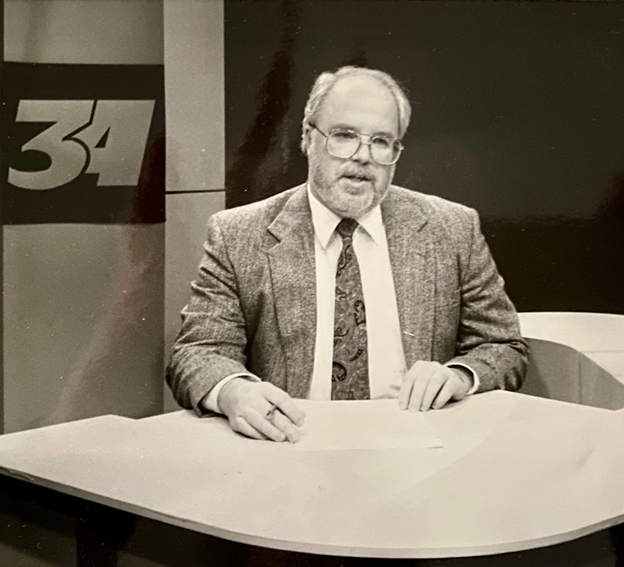 Robert F. “Bob” Hartman, The Voice of TV 34”, passed away peacefully, at home on February 20th, with his loving wife of 52 years by his side after a long illness at the age of 71.

Bob was born on March 1, 1949 in New Jersey at Margaret Hague Maternity Hospital. He lived in North Bergen with his parents until they moved to the Robertsville section of Marlboro, NJ in 1957. He attended school in the one-room Robertsville schoolhouse, and Marlboro Central School when it was first built and played on the championship basketball team there. He attended Freehold Boro High School and graduated in 1967. It was there that he first met Mary Lou, his future wife, riding home on activity school bus. They were married on November 14, 1968 in his sophomore year at Belmont Abbey College. Bob is a US Air Force veteran. After 10 years of selling insurance, he decided to try his hand at broadcasting. He attended Brookdale Community College and took courses to make a career change. He was a reporter for WADB Radio in South Belmar; former News Director/Anchor/Sports Reporter/Sports Play-by-Play Announcer at Monmouth Cablevision: TV 34 News; former on Camera Talent & Producer for Discover NJ at New Jersey Network and former Sports Announcer for Comcast Sports TV.

When Monmouth College Men’s Basketball went into Division One, he broadcasted their first game in Boylan Gym. Bob also traveled to three NCAA tournaments with the Monmouth Hawks to capture behind the scenes video for the team. Bob & his family have always been Hawks fans, attending games well beyond his retirement as season ticket holders.

Bob also took part in the Marlboro Community, when his two children were growing up, he coached Pop Warner and Marlboro Recreation basketball. He loved the kids, always gave them a chance to excel and has kept in touch with many of them on Facebook. Bob also served on the First Marlboro Swim Club Committee.

When his two children finished high school, Bob & Mary Lou moved to Brielle, closer to their jobs and spent wonderful years living near the shore. In 2005 they moved back to Marlboro planning for retirement.

He was a lifelong NY Giants fan and loved going to his granddaughters’ softball and volleyball games.

The family would like to thank Kindred Hospice for their excellent care and support.

In lieu of traditional remembrances, the family requests with gratitude that memorial contributions in his name be directed to the Fulfill Food Bank; www.fulfillnj.org.

For the health and safety of all guests, current state and local health protocols of social distancing and the wearing of face masks are being strictly enforced at both events.

To leave a condolence, you can first sign into Facebook or fill out the below form with your name and email. [fbl_login_button redirect="https://wbhfh.com/obituary/robert-f-hartman/?modal=light-candle" hide_if_logged="" size="medium" type="login_with" show_face="true"]
×