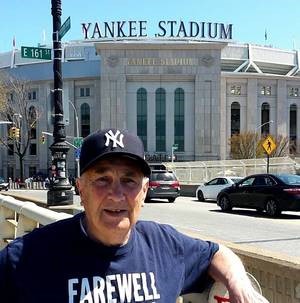 Private Funeral Service will be held at Holmdel Mausoleum.

Steve “Pop” Cittadino, Jr. 88, a longtime resident of Holmdel passed peacefully at his home  surrounded by his loving family on September 2nd

Pop was born in Newark and went to West Side High School before joining the U.S. Marine Corps. serving proudly in Korea. Following his honorable discharge Pop went to work for Anheuser-Busch brewing where he worked his way up Brew Master before retiring.

Pop was a volunteer coach for over 40 years for Holmdel Football Association, where he was always on the sidelines and as the Association’s in memoriam post stated “Pop was everyone’s father, grandfather and friend.” He was a member of the Frances Foundation Board of Trustee’s. Pop was an avid fan of the New York Yankees and the New York Giants. He was a fan of Lady Gaga and especially her songs; Bad Romance and Million Reasons as well as a fan of Al Jolson. He enjoyed his show, General Hospital and his family knew not to call him until the show was over.

He enjoyed trips to Atlantic City in one of his many Cadillac’s that he owned. He will always be remembered for his selfless, loving and amazing personality. A true father, grandfather and friend to all.

Pop was pre-deceased by the love of his life, his wife Josephine in 1994; and his daughter Diane Cittadino in 2019.

Pop’s Life Celebration will be Monday, Sept. 7th, 12 noon until 2 pm at the Holmdel Funeral Home, 26 South Holmdel Road, Holmdel. A private entombment will follow at Holmdel Mausoleum for Pop’s immediate family. To share a favorite memory of Pop or send messages of condolence please visit his page of tributes at www.holmdelfuneralhome.com. In lieu of flowers the family asks that you consider making a donation to The Frances Foundation for kids fighting cancer; www.francesfoundation.net.

To leave a condolence, you can first sign into Facebook or fill out the below form with your name and email. [fbl_login_button redirect="https://wbhfh.com/obituary/steve-cittadino-jr/?modal=light-candle" hide_if_logged="" size="medium" type="login_with" show_face="true"]
×

Private Funeral Service will be held at Holmdel Mausoleum.