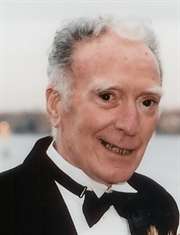 William Louis Clayton, Jr., Monmouth Beach, NJ age 84, died Monday, August 24, 2009 at Riverview Medical Center. Born in Jersey City on August 16, 1925, Clayton was a graduate of St. Peter's Prep and St. Peter's College in that city. Entering the newspaper industry immediately after college, he held executive positions in the circulation, promotion, and public relations fields at many of the country's leading publications. He resigned as director of promotions and public relations with the now defunct Washington D.C. Star in 1968 to become Assistant Promotion Manager of the New York Daily News. Following a corporate restructuring in 1979, he left New York to become Circulation Manager and Promotion Director for the Miami, Fort Lauderdale, and Palm Beach Reviews, three daily legal/finance newspapers. Clayton returned to New Jersey in 1982 to become Advertising Promotion and Special Events Manager for the Mihm Corporation, a Monmouth Beach conglomerate which included the Channel Club along with a number of other restaurants, marinas, yacht sales, and marine construction enterprises. He retired in 1986 but remained active as a public relations consultant for local businesses and political figures. He came out of retirement in 1989 to become editor of the Middletown Courier but resigned a little more than a year later. He remained active as a consultant and political adviser until his death. Clayton served in World War II as a naval aviation ordinance man and aerial gunner. He also saw duty at a number of U.S air stations including N.A.S. Guam. A lifelong interest in politics led to his management of election campaigns on the local, state, and national levels. He was a private pilot, a past president of the International Newspaper Promotion Association, a member of the American Arbitration Association, and an active mediator with the Monmouth County Community Dispute Resolution Committee. Clayton also served as Secretary of the Monmouth Beach Business Association. He was a communicant of Star of the Sea Roman Catholic Church, Long Branch. He is survived by his wife of 57 years, Phyllys, Monmouth Beach, son and daughter in law William L. Clayton III and Mary Beth, Shark River Hills, son, Jeffrey B. Clayton, Barnegat Township, two daughters and sons in law Joanna and Eli Dokson, Crestone Colorado, and Lauren and John Woodmansee, Bow, Washington, seven grandchildren, Morgan Dokson, Marcella Dokson Lunt, Maya Dokson, Orielle Dokson, Hillary Clayton, Kristin Clayton Circelli, Kyle Clayton, and five great grandsons. A private memorial service will be held on a date to be determined. To light a candle with your thoughts and memories please visit www.woolleyfh.com.

To leave a condolence, you can first sign into Facebook or fill out the below form with your name and email. [fbl_login_button redirect="https://wbhfh.com/obituary/william-clayton/?modal=light-candle" hide_if_logged="" size="medium" type="login_with" show_face="true"]
×