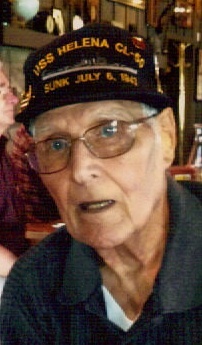 Light Cruiser U.S.S. Helena CL-50 William J. Schardt Jr., 92, of Holmdel passed away at his daughters home in Shelbyville, KY on Sunday, September 1st, 2013. Born in Perth Amboy, he lived in Woodbridge then moved to Holmdel 57 years ago. Prior to his retirement he was a machinist for PSE&G in Sewaren, NJ. He served his country in the U.S. Navy from 1939 to 1945, and was a survivor of the attack at Pearl Harbor. His ship, the Light Cruiser U.S.S. Helena CL50 was hit by the first torpedo fired at the beginning of the attack, and was later sunk in the battle for Kula Gulf on July 6, 1942. He is survived by his loving wife Anna M. Schardt (nee Covert), his loving son William J. Schardt, III and daughter-in-law Geri Schardt, his loving granddaughters Holly and Kirsten Schardt all of Holmdel, his loving daughter Judy Turner and son-in-law R.L. Turner of Shelbyville, KY, his three loving grandsons Randy, John, and Patrick Turner, by his great grandchildren, and by his adoring sister Irene Horman. Visitation will be at the Holmdel Funeral Home 26 South Holmdel Road, Holmdel NJ on Thursday from 4:00 PM to 8:00PM. A funeral service will be offered at the funeral home on Friday morning at 9:30A.M. . Interment will then follow at the Brigadier General William C. Doyle Veterans Memorial Cemetery, Wrightstown, NJ. In lieu of flowers, please make donations in his name to the Wounded Warrior Project P.O. Box 758517, Topeka, KS 66675

To leave a condolence, you can first sign into Facebook or fill out the below form with your name and email. [fbl_login_button redirect="https://wbhfh.com/obituary/william-j-schardt/?modal=light-candle" hide_if_logged="" size="medium" type="login_with" show_face="true"]
×